Bowling Green State University expels three students and suspends 17 in connection to the death of a student particâ€twitter.com/i/web/status/1â€¦bz

The Justice Department advises the Treasury Department to turn over former President Trump's tax returns to the Houâ€twitter.com/i/web/status/1â€¦vR

The Senate moves forward with a key infrastructure vote as lawmakers race to pass the bipartisan deal before leavinâ€twitter.com/i/web/status/1â€¦KZ 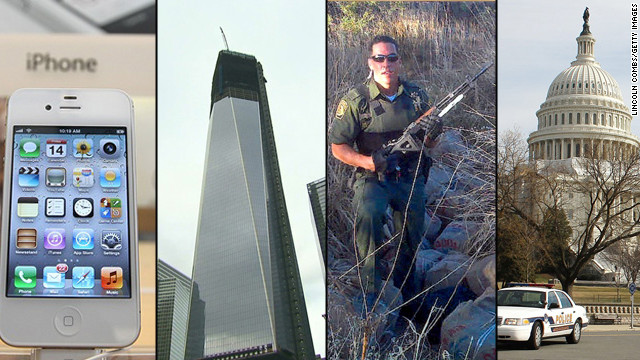 AÂ long-awaited reportÂ on a controversial ATF gun-trafficking operation known as Fast and Furious is expected to be issued by the Justice Department inspector general by Tuesday - the day that the inspector general is due to testify on the matter in front of Â a House committee.

The sting operation, set up by Bureau of Alcohol, Tobacco, Firearms and Explosives officials in Arizona, allowedÂ straw purchasers to leave Arizona gun shops with illegally purchased weapons. The operation was designed to track the weapons to Mexican drug Â cartels, but the monitoring broke down and nearly 2,000 weapons were "lost." Many are believed to have ended up with the cartels.

Two senior ATF officials familiar with the report, insisting on anonymity because they are not authorized to discuss it, say the findings are consistent with whatÂ  headquarters has maintained throughout the investigation - that much of the blame lies with officials in Phoenix who developed the operation and largely kept Washington executives in the dark.

Politicians not invited to Tuesday's 9/11 ceremony in New York

The United States on Tuesday will mark 11 years since the 9/11 terrorist attacks, but politicians won't be among those gathering at the World trade Center memorial in New York.

Organizers did not invite politicians to attend the event, in part because of tension between the governors of New York and New Jersey and New York City's mayor over who is responsible for costs of a yet-to-be-opened 9/11 museum and other things, as WNYC reports.

Other official remembrances of the attacks that killed nearly 3,000 in New York, Washington, and Pennsylvania are planned. Vice President Joe Biden, for instance, is scheduled to speak Tuesday in Shanksville, Pennsylvania, where one of the hijacked airplanes crashed 11 years ago.

Obama honors those who joined military after 9/11

Congressional truce? Budget showdown could be pushed to post-electionÂ

Congress will return from recess this week, and it looks like they're set to avoid a possible October 1 government shutdown.

Lawmakers are expected to vote this week on a deal that would extend current government spending levels for six months, putting off threats of a government shutdown until after the November election, which will decide the makeup of a new House and Senate.

House Republicans have been pushing for more cuts, but some GOP lawmakers told CNN they were OK with the deal, sayingÂ that anything that would come out of 11th-hour negotiations in the lame-duck session of Congress after the November vote could be significantly worse than the six-month spending deal reached by leaders of the GOP-led House and the Democrat-led Senate. Conservatives also believe that agreeing to a stopgap deal now takes some leverage away from Senate Democrats to try to use the threat of a shutdown to extract items from House Republicans on other year-end fights on tax breaks and scheduled cuts to defense programs they oppose.

We'll learn later today whether the nation's third-largest public school system will avert a teachers' strike, which would begin Monday if nothing is worked out.

If a strike happens, it would affect nearly 700 schools and about 400,000 students.Â The school year would abruptly stop not long after it started: Some students in the district began class on August 13, and more - on a different schedule - started on September 4.

The Chicago Sun-Times reports the teachers are under pressure to move back their strike deadline if no resolution is reached before Monday. The teachers and school administrators are bargaining on issues such as merit pay and health care.

The next iPhone is (almost assuredly) here

Apple fans will be looking forward to Wednesday's expected unveiling of its next iPhone, which industry observers say could be smaller, lighter and faster than previous versions.

Last week, Apple sent the media a cryptic invitation to an announcement event Wednesday in San Francisco, widely believed to be the iPhone unveiling. The invitation featured the number 12 - for September 12 - whose shadow not so subtly appears in the form of the number 5.Â This reinforces speculation that the new device will be called iPhone 5 instead of iPhone 4G or something else.

Multiple reports citing anonymous sources have said that the new phone will be released on September 21, nine days after Wednesday's announcement.

Three attacks against Iraqi military and police left at least 22 people dead Sunday, the latest in a rash of violence targeting security officials in the country.

In the first incident, a car bomb targeting a police recruitment center in Kirkuk killed at least eight people and wounded 36 others, police officials said.

In the second incident, gunmen attacked an Iraqi army checkpoint that leads to a military base near Tikrit, killing four Iraqi soldiers, the Interior Ministry said.

Somali lawmakers are scheduled to choose the next president Monday, moving the nation a step closer to its first stable central government since the 1991 ouster of a dictator.

The new parliament, which was selected last month, will hold a ballot to choose the president from about two dozen candidates.

In a letter to lawmakers, the United Nations called for a credible leader who can propel the African nation toward peace.

"After two decades of civil war, a collapsed state and innumerable indignities to the proud Somali people, we are hours away from the election of a new president," said Augustine P. Mahiga, the U.N. envoy to the nation.

3:05 pm ET July 30, 2021 RETWEET
Monsoons rains this weekend could cause flash flooding across the West -- and possibly help relieve areas of severeâ€twitter.com/i/web/status/1â€¦ln
CNNweather