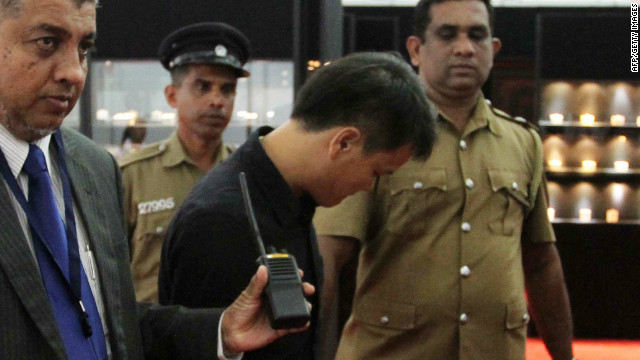 Police say a man who was with Chou at the exhibition might have gotten away with the real gem, and that Chou might have swallowed the fake to divert attention to himself, thereby buying time for the other man escape,Â the British Broadcasting Corp. reported.

"We suspect that as habitual offenders, this group were in the habit of swapping real stones for fake ones," a police spokesman, Ajith Rohana, told the BBC.

Police said Chou had six more fake gems in his pocket, according to the BBC.

The diamond's owner, Suresh de Silva, told the BBC that the men visited his stall twice, and he stopped Chou and called for police on the second visit. He swallowed the fake when police arrived, de Silva told the BBC.

The BBC reports that police are trying to find the second man.

By the end of March, 1 in 7 New York adults had Covid-19 â€” about 10 times higher than the official account, accorditwitter.com/i/web/status/1â€¦HhfW
cnni

8:21 pm ET May 29, 2020 RETWEET
Protestors facing off with Minnesota State Police an hour before the 8pm curfew. #GeorgeFloyd https://t.co/vn0DrmBEI7
sarasidnerCNN