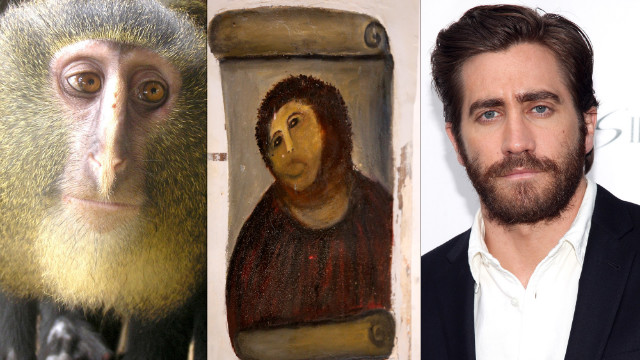 Who's the monkey? Lesula's famous lookalikes

A new species of monkey was unveiled to the world Wednesday after scientists discovered the little guys living in the Democratic Republic of the Congo three years ago.

But after years of studies to confirm the species - Cercopithecus lomamiensis, Lesula for short - was indeed the first known of its kind, many who gazed upon the primate's face had the feeling they'd seen him somewhere before.

From heartthrob celebs to  favorite family members and friends, the CNN community has gone ape trying to figure out just who this monkey looks like. Here's what some of our commenters had to say. Share your thoughts in the comments below.

lizzy10 Sorta looks like my Uncle Vic, only with kinder eyes.

Jameserizer Hey, I know that dude!  Man, I went to school with that dude!

Rob LeeI don't think it was very nice for them to post my high school yearbook photo. That was 10 years ago and I was really tired and I didn't shave because I wanted to look old and cool. Besides, do you know how long it takes to shave your entire forehead and face?

FBr David Lee looks like a cartoon version of jake gyllenhaal, no offense to that good actor.

Abdullah719,Muslim.I can totally see the resemblance of this one with Paris Hilton, can't you??

NavChief Hey, It's Chris Barron from the Spin Doctors.

A blast from the past

MeJustMe The monkey looks like a woodcut of Isaac Newton.

HoneyBee1234 Beautiful monkey. Looks so calm. My first thought upon seeing it was that it reminds me of The Mona Lisa by Leonardo da Vinci.

foofighter73 I see the face of a sad Jesus in that monkey.