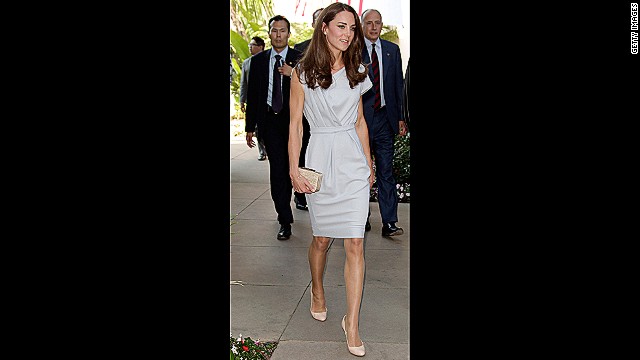 Some CNN.com readers say they are concerned about the blurring of their public lives and their private worlds.
September 14th, 2012
08:35 PM ET

Editor's note: We're listening to you. Every day, we spot thought-provoking comments from readers. Below, you'll see highlighted posts that we noticed.

Heading into the weekend, readers are thinking about the lines between public and private life, and between work and play. There are different stories that give different takes.

The publication of photos showing Kate Middleton, Duchess of Cambridge, topless has got readers wondering how much is too much intrusion into a person's life. The following reader drew a line between this incident and the recent images of Prince Harry in his birthday suit.

Scott Bennett: "The publication of the photos of Katherine while on her holiday with William was not only despicable, but also shows the idiocy of the editorial staff of the 'publication' Closer. When Mlle Pieau described the reaction to the pictures' publication as "disproportionate" and slammed the British press as "complete hypocrites," since photos of Harry naked were published by The Sun, she shows her lack of basic human understanding. The two incidents are not even remotely comparable. 1) Harry was cavorting about in his hotel suite, having invited loads of strangers, thus opening the doors for such potential exposure; William and Katherine were vacationing alone in a private residence (or so they thought); 2) Harry is a single, 20-something man; Katherine is a married woman in her early 30s who will at some point be someone's mother. THEY NEED TO GET A GRIP ON HUMAN DIGNITY and get over their self-centered approach to life and their 'job' already! Disgusting, just disgusting!"

But then, is being naked worth the risk when you're a well-known figure?

Other99Pct: "Um, don't go outside with your shirt off if you don't want people to see you?"

Many people were disturbed by the idea that people are interested in such images.

boogbop: "This was a gross invasion of privacy. Kate and William were not on a beach or a nudist club, and I gather that no third party was present. They were on a secluded patio on a private property . The paparazzi culture is vile. There is no journalistic obligation to gratuitously show intimate picture of celebrities in private moments. The public who buys these rags provides the fuel for this culture."

Or, looking at things another way, why should Middleton be worried?

Sakkage: "What's the problem? She seems to have a nice body that she takes good care of. She has nothing to be ashamed of; on the contrary."

Some readers brought up safety concerns.

Christine Lee: "As shameful as it was for the paparazzi to take these pics, Kate and Will should have been more careful. Their pictures are taken everywhere they go, so what made them think that they wouldn't be followed while vacationing? It was quite foolish of her in this instance (I love the couple, but they have to be more cautious)."

Physh: "Paparazzi are the lowest form of life."

Another aspect of personal space affects even more people: the expansion of technology (and in this case smartphones) into daily life.  Some readers have griped that mobile technology is making people "SuperStupid." It was interesting to see  the reaction to the following story.

We posed the question to readers: Do you sleep with your cell phone? Alarm clock manufacturers might want to take heed of these remarks. Whether it's your morning alarm or just a way to keep tabs on what's going on, plenty of people say they keep their devices close to their pillows. But it's not like you think.

Unclejerri: "Kinda unfair in some respects because I use my Droid as an alarm clock to wake up. Yeah sometimes I get an e-mail at 10 p.m., but my phone is on silent for e-mails and texts. Only my alarm or a phone call will wake me up. It's funny to be in a waiting room anymore. People will look at their phones with nothing to do but just pretend like something needs there attention."

fireoasis: "I do not like the alarm clocks out there. I much prefer the alarm on my smart phone. That being said, I am also a stay at home mom and there is no employer sending me texts/e-mails/charts or what not in the middle of the night. I keep the phone with me 24/7 if the children are out of the house as that is my link to them while they are gone. If they need me, they text me and you're darn right I would not want to miss a text or call that might come if my child might need me. No matter what that need might be. Once they are home, however, I tend to let the phone be wherever it might be in the house, I could care less."

HawaiiSquid: "Who cares if you sleep within reach of your phone or don't have a phone at all. If you're reading this, you've at least partially embraced technology (you're ON the Internet aren't you?). We're more informed while being more distracted. This isn't a new phenomenon. My grandparents said the same thing about radio when it came out and my parents said something similar when television came out. Just to make sure I didn't get left out, I had the same speech with my teenager when she got her first smartphone. She texted me her response, 'OMG dad! IDK why ur tripn!' "

Can work and play mix? This reader said concerns back at the office ruined a family getaway.

Tendofreak: "Took a long weekend with my family and went to Walt Disney with the grandkids. Phone call from my boss while I'm there. Huh? Like the fool that I am, I answered it. Situation at work blah blah blah ... totally RUINED my whole time with the family for the next three days till I got back into the office. I will NEVER answer another phone call from work EVER again if I'm not there. Nothing is more important than time with family. That cannot be regained. Work ... will always be that ... work."

rswfire: "I'm 35 and I started programming computers when I was 6 years old. I have been programming computers ever since. There are times, many times, where I spent 12-16 hours in front of a computer doing my job. But then I take some time off and explore other interests to recharge and enjoy my life ... such as hiking. I often go hiking deep in the forests where basically no one ever is, and even then, there are times I need to sit down (in the middle of a trail!), take out my small laptop from my backpack, turn on my 4G card, and do something for work. That's part of my job, and it doesn't bother me. ... All of that said, I do think we as a society have in some ways become more disconnected. I don't know if technology can really be blamed for that though. I've lived in the same house for four years and I don't know *any* of my neighbors. We're friendly with each other (the occasional "hi" when we happen to see each other) but never anything beyond that. And why is this? We all seem to stay within our own worlds now, never making an effort to expand them."

This reader said they have no choice but to get on that phone.

Kevin Williams: "I don't know where some of these commenters work, but if I didn't stay connected 24/7, I would be quickly replaced by someone who was. Management expects you to go the extra mile because it's no longer the extra mile, it's a show of dedication and commitment to the job. No one these days can afford to appear to be anything less than fully engaged in their job all the time. ..."

AndreaMilnes: "I sleep with my smartphone ... because it's my alarm clock. Usually an hour or so before bed, you'll find me lounging with a book. Maybe if I'm in the middle of a twitter conversation I'll flip between book and phone, but it's mostly book. The way I see it, unless you're job requires you to be on call (as in doctors and IT personnel), then there is no reason at all to do work stuff 24/7 when you're not being paid for the time. I'm not going to do any work at all unless I'm being paid for it. My time is valuable and if you want me to use it to do work for you, pay up. This is part of the problem with the culture surrounding American business. The concept of having a private life has been lost as we've grown to expect extreme drive and work ethic from everyone. There's nothing wrong with putting in good work, but having a life too is very important.

Science fiction is converging with reality, argue these readers.

RET80: "Everyone should read 'Hyperion' by Dan Simmons, a 1990 sci-fi novel set in a futuristic world where humans have merged with technology, constantly connected to the datasphere (eerily similar to the Internet) and have essentially become slaves to it. The novel takes on a relevance when read today, as we march toward a future envisioned by the author."

Manny Perez: "Sometimes when I walk down the street after work at night and see everyone glued to their phones like zombies, I can't help but wonder whether we're already living in a sci-fi horror movie. Smartphones have become a technology that snatches your soul."

Do you have your smartphone with you right now? Share your opinion in the comments area below and in the latest stories on CNN.com. Or sound off on video via CNN iReport.