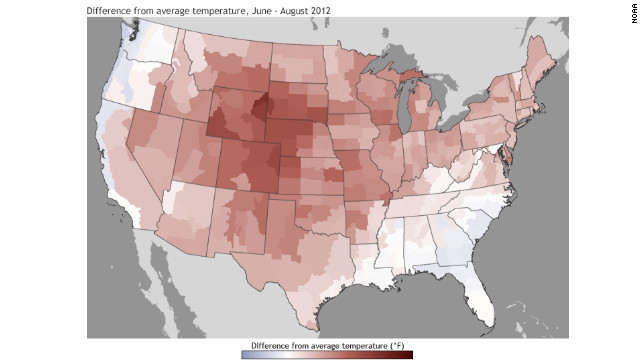 The first eight months of 2012 were the hottest ever recorded in the continental United States and the summer period of June, July and August was the third hottest ever, the National Climatic Data Center reported Monday.

Although the August average of 74.4 degrees Fahrenheit made it only the 16th hottest August on record, the hottest July ever combined with the hottest spring on record to keep January-August 2012 atop the record books.

The nation as a whole is averaging 4 degrees Fahrenheit above average for the year. That's a full degree higher than the same period in 2006, the second hottest January-August on record.

The hottest temperature recorded for the month was 126 degrees F in Death Valley, California, recently recognized as the hottest place on Earth.

Outside the continental 48, Alaska and Hawaii temperatures were also below normal.

Meanwhile, drought conditions continued to affect a large chunk of the 48 states. The portion of the country experiencing exceptional drought, the worst level of drought, doubled in August to 6%, the NCDC reported. Overall, 39% of the country was in severe to extreme drought, "indicating that the drought has intensified," it said. Only the droughts of the 1930s and 1950s have been worse, the agency said.

Drought by the numbers