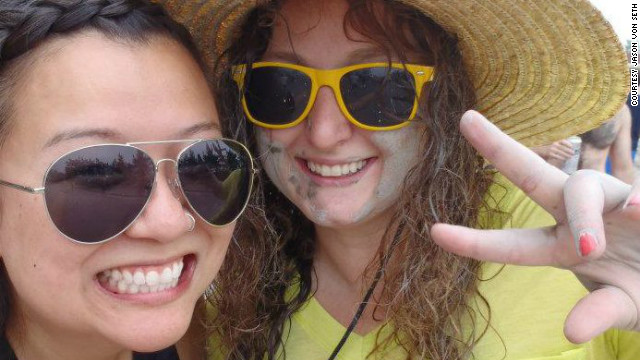 Cathy Huynh, left, and Kari Bowerman took this photo in Vietnam on July 23, seven days before they were first admitted to the hospital.
September 19th, 2012
09:25 AM ET

Report: Tourist death in Vietnam not from poison

Tourists Karin Bowerman, 27, of Wisconsin, and Cathy Huynh, 26, of Ontario, died mysteriously just days apart this summer in Nha Trang, Vietnam. Since then, family and friends have waited anxiously for the autopsy results.

Speculation on the women’s cause of death ranged from alcohol poisoning to insecticide poisoning. But authorities are now saying there were no traces of toxins in Bowerman’s blood or gastric fluids, according to the Tuoi Tre News, an English-language news site operated by Vietnam’s largest newspaper.

“She died from breathing failures, circulatory collapse due to brain edema,” Lt. Col. Nguyen Hong Ky, deputy head of the Nha Trang police department, told Tuoi Tre News. Brain edema is a buildup of fluid in the brain. The official autopsy report has not been publicly released.

On July 30, Bowerman and Huynh were admitted to Khanh Hoa General Hospital; both were vomiting, had difficulty breathing and showed signs of severe dehydration.

Bowerman died later that night. Huynh was released from the hospital and died two days later. Bowerman’s body underwent an autopsy in Vietnam, according to her family, while Huynh’s body was returned to Canada to be examined in Hamilton, Ontario.

Tuoi Tre News reported earlier that Bowerman’s medical samples had not been sent to Hanoi, Vietnam, for testing as late as two weeks after her death. The director of the local forensic examination center told Tuoi Tre News that the wait period could affect the results, even if the samples were well preserved.

The autopsy results from Huynh are not expected for several weeks.