The supermarket shooting suspect made a threat while attending high school last year and was sent for a mental healŌĆtwitter.com/i/web/status/1ŌĆ”Hz 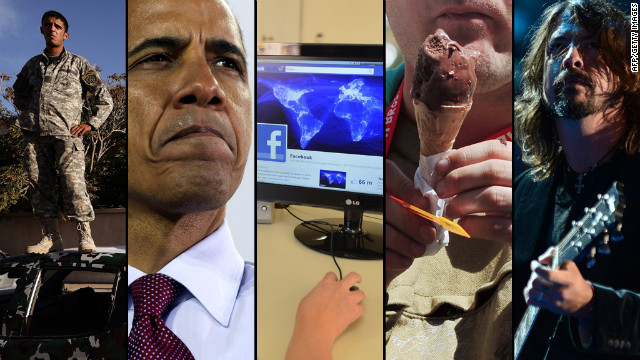 The development is yet another indication that public and governmental pressure is building against armed groups in Libya since people from a radical Islamist group were accused of involvement in an attack at the U.S. Consulate in Benghazi earlier this month that left┬Āfour Americans dead, including U.S. Ambassador Chris Stevens.

He is expected to once again reject the views in a controversial anti-Islam video that is thought to have instigated the violence, one official said, while underscoring that violence is never acceptable.┬ĀRegarding Iran's nuclear program, the forum of world leaders is an "opportunity for him to underscore that Iran must not be allowed to develop a nuclear weapon, an official said. Western governments have suspected Iran of trying to make nuclear weapons, but Iran insists its nuclear program is solely for peaceful purposes.

Speaking of Israel, watch for the┬ĀPalestinian Authority to announce at the General Assembly on Thursday an attempt to obtain nonmember observer state status at the U.N., one step up from its current status as a permanent observer. Israel objects, saying it┬Āis an attempt to get state recognition by shortcut, circumventing negotiations on critical issues.

Organizers are calling it the "largest syndicated charity concert in online and broadcast TV history."┬Ā The stars are Neil Young with Crazy Horse, Foo Fighters, The Black Keys, Band of Horses and K'Naan. The venue is New York City's Central Park.

Ukrainian forces say they have ended their "combat mission" in besieged Mariupol, as hundreds are evacuated from thŌĆtwitter.com/i/web/status/1ŌĆ”Zx
cnni

7:39 pm ET May 16, 2022 RETWEET
The future of the United Kingdom's fish-and-chip shops are under severe strain as the prices of key ingredients ŌĆö itwitter.com/i/web/status/1ŌĆ”wc9F
cnni

7:15 pm ET May 16, 2022 RETWEET
Elisabeth Borne has been named the new Prime Minister of France, the first time in 30 years that a woman has held tŌĆtwitter.com/i/web/status/1ŌĆ”a9
cnni

5:54 pm ET May 16, 2022 RETWEET
JetBlue is going hostile in its effort to acquire Spirit (SAVE), the latest twist in an industry battle for the lowŌĆtwitter.com/i/web/status/1ŌĆ”cR
cnni

Ukrainian forces say they have ended their "combat mission" in besieged Mariupol, as hundreds are evacuated from thŌĆtwitter.com/i/web/status/1ŌĆ”Zx
cnni

7:39 pm ET May 16, 2022 RETWEET
The future of the United Kingdom's fish-and-chip shops are under severe strain as the prices of key ingredients ŌĆö itwitter.com/i/web/status/1ŌĆ”wc9F
cnni

7:15 pm ET May 16, 2022 RETWEET
Elisabeth Borne has been named the new Prime Minister of France, the first time in 30 years that a woman has held tŌĆtwitter.com/i/web/status/1ŌĆ”a9
cnni

5:54 pm ET May 16, 2022 RETWEET
JetBlue is going hostile in its effort to acquire Spirit (SAVE), the latest twist in an industry battle for the lowŌĆtwitter.com/i/web/status/1ŌĆ”cR
cnni

The baby formula manufacturer at the heart of a nationwide recall says it has reached an agreement with the FDA onŌĆtwitter.com/i/web/status/1ŌĆ”zo
cnnbrk