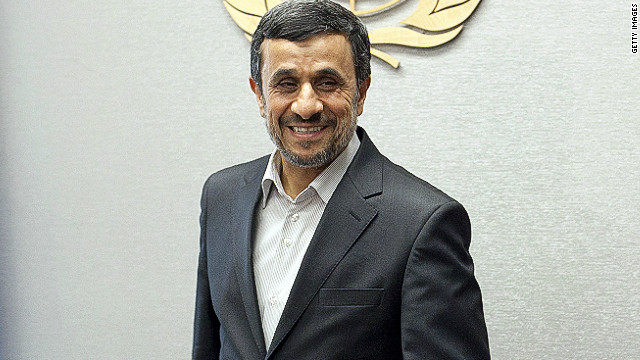 The U.S. delegation "has decided not to attend" the speech to be delivered by Iranian President Mahmoud Ahmadinejad before the United Nations General Assembly, Erin Pelton, spokeswoman for the U.S. Mission to the United Nations, said in a statement Wednesday.

"Over the past couple of days, we've seen Mr. Ahmadinejad once again use his trip to the U.N. not to address the legitimate aspirations of the Iranian people but to instead spout paranoid theories and repulsive slurs against Israel," Pelton said.

The Iranian leader's addresses to the assembly have often generated controversy in the past. The tensions over Tehran's disputed nuclear program and speculation over a possible attack on Iran by Israel offer ample material for drama this time around.

In previous years, several delegations have walked out during Ahmadinejad's speeches, which have assailed the United States and criticized countries that he said used the Holocaust as an "excuse to pay ransom to Zionists."

Five things we learned from Day One of the U.N. debate

He will be taking to the podium Wednesday, a day after President Barack Obama told the assembly that while Washington remains committed to a diplomatic solution to Iran's nuclear program, the United States "will do what we must to prevent Iran from obtaining a nuclear weapon."

A British man has become the first patient in the world to be fitted with a 3D printed eye, according to Moorfieldsâ€twitter.com/i/web/status/1â€¦ls
cnni

4:01 am ET November 27, 2021 RETWEET
The Great Barrier Reef has "given birth" in its annual coral spawn cnn.it/3cQEkCk https://t.co/zlTbSZnEuI
cnni

3:31 am ET November 27, 2021 RETWEET
Uber will allow users in Ontario, Canada, to place orders for cannabis on its Uber Eats app, a company spokespersonâ€twitter.com/i/web/status/1â€¦Qr
cnni

3:01 am ET November 27, 2021 RETWEET
Your next cup of coffee could be made without coffee beans. cnn.it/3HXDjGX https://t.co/CJbKg2vLLy
cnni

2:31 am ET November 27, 2021 RETWEET
The US will restrict travel from South Africa and seven other countries in response to the newly identified Omicronâ€twitter.com/i/web/status/1â€¦Ch
cnni