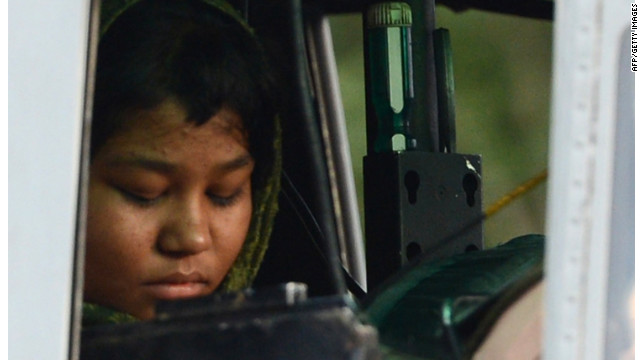 Police in Pakistan determined Rimsha Masih, 14, is innocent after being framed by an imam for desecrating the Quran.
September 30th, 2012
03:17 PM ET

Obama, Romney square off in Colorado

The first debate between President Barack Obama and GOP nominee Mitt Romney happens Wednesday at 9 p.m. ET, and the economy is expected to be the topic for about half of the 90 minutes.

Though the topics could change because of news developments, the other half is expected to focus on health care, the role of government, and governing, according to the organizers of the debate at the University of Denver.

iReport.com: What questions would you like to ask the candidates?

Last Thursday's CNN Poll of Polls, an average of five national polls of likely voters conducted over a week and a half, showed Obama with a 49% to 45% lead over Romney.

Blasphemy case against Pakistani teen could be nearing end

A juvenile court in Pakistan on Monday is expected to consider a police investigators' determination that a 14-year-old girl is innocent of allegations that she desecrated the Quran.

Pakistani police told CNN their investigation concluded Rimsha Masih is innocent and was framed by an imam. The girl faced life in prison on allegations that she burned pages of the Quran to use as cooking fuel. But Rimsha's lawyers said the accuser wanted to settle a personal score with the girl because the two didn't get along.

The teen's case sparked international outcry against the Pakistani government, some saying that its blasphemy laws are used to settle scores and persecute religious minorities.

A Pennsylvania judge is expected to rule by Tuesday on whether the state's new voter identification law disenfranchises voters.

The judge upheld the law earlier this year, but the state's Supreme Court sent it back to him to reassess whether alternative forms of identification are sufficiently available. The law requires that most voters show photo identification before casting ballots.

The law's opponents said the measure undermines the ability of registered voters to vote and that it was passed without sufficient evidence of prior identity fraud. Its backers argue the law strengthens voting procedures and protects against fraud.

Seven years after Adam Greenberg was hit in the head by a pitch in his first Major League Baseball plate appearance, he's finally going to get a chance to get a complete MLB at-bat.

Greenberg, who hasn't been to the majors since that injury with the Cubs in 2005, is expected to take an at-bat for the Miami Marlins on Tuesday night, during their game against the visiting New York Mets.

The Marlins - the very team that knocked him out of his July 2005 game - signed him to a one-day contract last week so that he could bat in Tuesday's game, the penultimate match of the regular season. A filmmaker's campaign, including an online petition, helped persuade the Marlins to give Greenberg the chance.

Greenberg, 31, last played professionally for Bridgeport in the independent Atlantic League in 2011, but has been working out and served as a reserve outfielder for Team Israel in World Baseball Classic qualifying games this month.

Friday marks the 50th anniversary of the release of the first James Bond film "Dr. No." What better to celebrate than to buy Bond's 2008 Aston Martin 6 Litre V12 DBS two-door coupe?

The car, used by actor Daniel Craig in "Quantum of Solace," is expected to attract up to £150,000 at an auction at Christie’s action house in London on Friday. Friday's event will sell the car and nine other items relating to the films. Forty other items are being auctioned online through October 8.