Haiti canceled its Carnival celebrations after deadly protests and gunfire interrupted the first day of festivitiesãtwitter.com/i/web/status/1ãÎgA

The widow of Kobe Bryant is suing Island Express Helicopters for the January crash that killed the NBA legend and tãtwitter.com/i/web/status/1ãÎO0

Vanessa Bryant, Kobe Bryant's widow, remembers her late daughter Gianna. "She was daddy's girl, but I know she loveãtwitter.com/i/web/status/1ãÎvT

Movie producer Harvey Weinstein is found guilty of a criminal sexual act and rape at his New York trial, but acquitãtwitter.com/i/web/status/1ãÎXV

Several people are hurt after a driver plows into a carnival parade crowd in the German town of Volkmarsenãtwitter.com/i/web/status/1ãÎAB 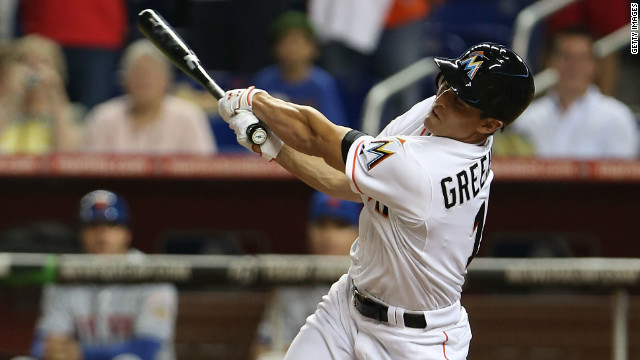 'One at-bat' player strikes out smiling

Update 8:32 p.m.: Adam Greenberg struck out on three pitches from Mets knuckleballer R.A. Dickey to lead off the bottom of the sixth inning. Greenberg was pinch-hitting for Marlins left fielder Bryan Petersen at the top of the order with the Marlins leading 2-0.

The Marlins Stadium public address system played Aerosmith's "Dream On" as Greenberg, wearing No. 10, walked up to the plate and took his place in the left-hand batter's box. He took a strike from Dickey, swung at and missed the second pitch and waved at a pitch around his chin for the third strike.

The crowd cheered loudly for him as he returned to the dugout, where his one-day-only teammates congratulated him and slapped the beaming ballplayer on the back.

The world of baseball and its fans greeted the moment with a wave of warm-and-fuzzy tweets:

Congrats to @adamgreenberg5, who just did something millions of us dream about but never accomplish. #oneatbat

Adam Greenberg story very cool. But you know he has to think: "Sheesh, one at-bat and it's knuckleballer? Seriously?"

Glad I got to see Greenberg's #OneAtBat. Definitely a special moment for him. Glad the #Marlins gave him this opportunity.

Proud to be a baseball fan right now. #OneAtBat #Marlins

Original post: Adam Greenberg signed a one-day contract with the Miami Marlins on Tuesday afternoon in anticipation of taking a single at-bat in the night's game against the New York Mets.

Greenberg, now 31, was hit in the head by a pitch in his first and only Major League Baseball plate appearance, with the Chicago Cubs in

2005 and has not played in the majors since. A hit-by-pitch does not count as an official at-bat, so Greenberg technically has never batted in the major leagues.

He petitioned the Cubs to let him come back for one official at-bat with them, but team officials turned him down. The Marlins agreed last week to help Greenberg make his dream come true. Marlins manager Ozzie Guillen said he plans to use him as a pinch-hitter in the middle of Tuesday night's game, perhaps in the pitcher's spot in the lineup, according to MLB.com.

"I'm ready to help the team," Greenberg said in a tweet on the Marlins' account. "The Marlins are an amazing organization. ... I couldn't be more thankful."

Italy is racing to contain the first major outbreak of a deadly new coronavirus in Europe, prompting fears that theãtwitter.com/i/web/status/1ãÎfS
cnni

1:52 am ET February 25, 2020 RETWEET
Even as the coronavirus outbreak appears to be stabilizing in parts of China, with six provinces on Monday loweringãtwitter.com/i/web/status/1ãÎBE
cnni

1:31 am ET February 25, 2020 RETWEET
All 16 patients with novel coronavirus in Vietnam, including a three-month-old infant, have recovered from their ilãtwitter.com/i/web/status/1ãÎmd
cnni