Actually, it wasn't some yahoo behind the stick of a 727. Professional pilots deliberately crashed the plane for scientific study.

At least 38 people are dead after two ferries collided during a holiday celebration Tuesday in Hong Kong's harbor. Survivors recounted the fear and chaos that followed the collision. One passenger told CNN affiliate i-Cable:

The water was suffocating me. My friend tugged with all her might and got my leg out. I was wearing a life jacket, so I floated up to the surface. I had swallowed a lot of water. I really thought I was going to die. Thinking about all those at the bottom who were stuck, they're not here anymore.

Calf rescued from mine shaft

Rescuers worked for several hours the pull a calf out of a mine shaft Monday in Westmoreland County, Pennsylvania, CNN affiliate WTAE reports. Professional and volunteer workers used an excavator to retrieve the animal from a 16-foot hole.

The calf's mother momentarily charged the dozens of people crowding the old mine shaft, according to WTAE. "We were a little nervous. Before darkness fell, she (the cow) kept trying to get up in here. Fortunately, she stayed away," Assistant Fire Chief Patrick Kromel said. 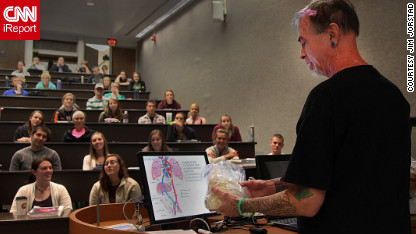 Tom Volk has two hearts: one in his chest and one he carries around.

iReporter Jim Jorstad shared a powerful photo essay about a professor who underwent a heart transplant and now totes his old heart around in a jar for teaching purposes.

Jorstad is director of academic technologies at the University of Wisconsin-LaCrosse and produces digital stories as a hobby. He says he wasn't sure what to think when he first saw Tom Volk on campus, with his dyed hair, tattoos and piercings. He later learned that Volk is not only a respected professor of mycology (the study of fungus), but also the survivor of a heart transplant - who keeps his old heart in formaldehyde and shows it to anyone who asks.

"The more I learned about the guy, the more fascinated I became with him," he said. The iReporter visited Volk's classroom, shot portraits and interviewed him for about an hour. He is working on a video piece.

A CNN story with video showing a Philadelphia police officer punching a woman in the face has generated hundreds of comments. Some defended the officer's behavior, while others said it was indefensible. (In the first comment shown here, Centrist1 is responding to other commenters.)

Centrist1
sharoom: The woman has a bottle with liquid right behind a police officer.  Liquid flies from the bottle onto the police officer.  Not knowing what kind of liquid it is, he has every justification to tell her to stop to be arrested.  Every justification.  And if she  resists by fleeing he has the power and duty to stop her.
Randall: No, but she should be punched if that is the quickest most effective way to stop her from fleeing.  What do you want, a Keystone Kops chase through a crowd?
Plankton01: "No man strikes a woman" might be a good general rule to live by, but (1) those who want equality must accept equality and (2) a police officer carrying out an arrest has to use violence where warranted.
There are absolutely times when the police get out of control and have to be reined in. But this video doesn't give nearly enough information to let us know if this is one of those times.
But to those who have made up their minds, little things like the truth don't matter much, right?

Matt Perkins
That's "not how they were trained," really? Seems to me that there's a pattern of police breaking with their training. Seems to happen too much these days, or at least we have videographers to show us police abuse. Too many incidents to not be disregard for training. Perhaps the training itself needs to be reviewed. When the police view the people as enemies, we have a problem.

Math joke of the day

President Barack Obama and his Republican challenger, former Massachusetts Gov. Mitt Romney, will meet Wednesday evening in Denver for the first of three debates. CNN will provide live coverage that you can share.

The candidates may look for ammunition in a report to be released in the morning. The Bureau of Labor Statistics will issue its latest figures on employment and unemployment in major metropolitan areas.

1922 - Rebecca Felton becomes the first female senator after being appointed by the governor of Georgia.

1974- At the conclusion of the regular season, the Cleveland Indians sign Frank Robinson as the first black manager in Major League Baseball.

1993 - Two U.S. Special Forces helicopters are shot down during an ambush in Mogadishu, Somalia; 17 U.S. peacekeepers are killed in the ensuing battle, the basis for the film "Black Hawk Down."

1995 - O.J. Simpson is acquitted of the murders of his estranged wife, Nicole Brown Simpson, and her friend, Ronald Goldman.

2003 - Roy Horn (from Siegfried and Roy) is mauled by a tiger during a show in Las Vegas.

2008 - O.J. Simpson is convicted of 12 counts in connection with a Las Vegas hotel room robbery.  He is sentenced on December 5 to at least 9 years in prison. 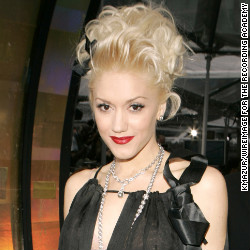