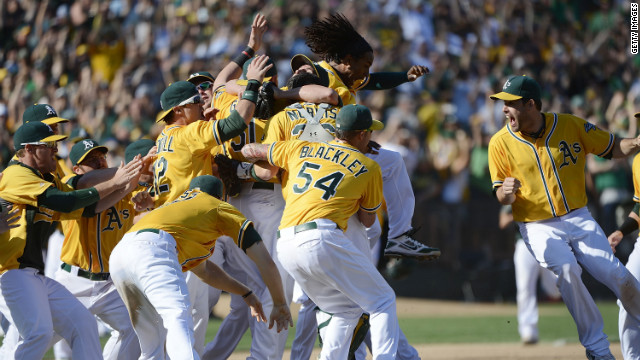 The last day of Major League Baseball's regular season turned out to be one of its newsiest and most dramatic. Here are some of the top stories from the day:

Update: â€˘ Detroit Tigers third baseman Miguel Cabrera became baseball's first triple crown winner (batting average, home runs and runs batted in) since 1967. Cabrera locked up the home run (44) and RBI (139) titles early in the day Wednesday as Texas' Josh Hamilton failed to produce either in the Rangers' loss to Oakland. Cabrera's batting title race against Los Angeles Angels rookie Mike Trout hinged on both men's performances in their respective games later Wednesday. Detroit manager Jim Leyland pulled Cabrera from the lineup after he went 0 for 2, leaving him with a .330 season average, and Trout got two hits in three at-bats to finish the season at .326, according to mlb.com.

Update: â€˘ The American League East race between the Baltimore Orioles and New York Yankees came down to the final game. The Yankees could clinch with a win or a Baltimore loss, but a Yankee loss combined with a Baltimore win would force a one-game playoff to be played Thursday. However, the Orioles lost 4-1 to Tampa Bay behind Evan Longoria's three home runs, making the Yankees' outcome moot. The Yankees crushed the Boston Red Sox 14-2 in New York.

â€˘ The Oakland A's captured the American League West by completing a sweep of the Texas Rangers, whom they'd been chasing all season.

â€˘ The Washington Nationals clinched the National League East, bringing postseason baseball to D.C. for the first time since the 1930s.

â€˘ The Atlanta Braves' Chipper Jones singled in his only at-bat in the final regular-season game of his 19-year career. In the same game, Atlanta pitcher Ben Sheets struck out two batters in his one inning pitched as he also concludes his career.

â€˘ The Houston Astros set a club record with their 107th loss in the team's final game as a member of the National League. The Astros will shift to the American League West next season.

Turkey strikes targets in Syria in retaliation for shelling deaths

Turkey fired on targets in Syria in response to the shelling of a Turkish border town in which five civilians were killed Wednesday, a statement from Prime Minister Recep Tayyip Erdogan's office said.

The town of Akcakale "was hit by artillery fire belonging to the Syrian regime forces," the statement said, in the first clear assertion of blame for the shelling.

Nine people were also injured when the shell landed on the town in Sanliurfa province, near the Syrian border, the statement said.

A human rights watchdog has documented "serious abuses" in the criminal justice system of Hamas, the political movement that runs the Palestinian territory of Gaza.

"After five years of Hamas rule in Gaza, its criminal justice system reeks of injustice, routinely violates detainees' rights, and grants impunity to abusive security services," Joe Stork, deputy Middle East director for Human Rights Watch, said in an online posting Wednesday. "Hamas should stop the kinds of abuses that Egyptians, Syrians, and others in the region have risked their lives to bring to an end."

In a bullet-point statement on its website, Hamas' Interior Ministry disputed the report's accuracy and called it biased and political.

At least five people were killed and a dozen injured when a shell landed on a house in the Turkish town of Akcakale, near the Syrian border, a local mayor and the semi-official Anadolu news agency said Wednesday.

The artillery shell was fired from the Syrian district of Tel Abayad, according to Anadolu. However, it is not yet clear what military force or group launched it.

The incident may worsen already tense relations between Turkey and neighboring Syria, which is wracked by an 18-month-long conflict.

Musa Ozer, who lives next to the house where the artillery shell landed, was crying as he spoke on the phone with CNN.

"The bomb fell on us. My head's really not in the right place right now," he said. "My uncle was injured and his wife died. What am I to make of this?"

Local neighborhood mayor Salih Aydogdu said those killed by the shell were three children, their mother and a neighbor.

Cabrera locked up the home run and RBI titles in the afternoon Wednesday as Texas' Josh Hamilton failed to produce either in the Rangers' loss to Oakland. Cabrera finished with 44 home runs to Hamilton's 43 (matched by the New York Yankees' Curtis Granderson with a late surge), and 139 RBI to Hamilton's 128.

Cabrera's batting title race against Los Angeles Angels rookie Mike Trout hinged on both men's performances in their respective games Wednesday. Trout got two hits in three at-bats to finish the season at .326, according to mlb.com. Detroit manager Jim Leyland pulled Cabrera from the lineup in the fourth inning in Kansas City after he went 0 for 2, leaving him with a .330 season average.

One person who said he wouldn't be shocked if Cabrera nabbed the triple crown was theÂ Boston Red Sox's Carl Yastrzemski, who hit .326 with 44 homers and 121 RBI as the last person to win the crown in 1967.

â€śIâ€™m surprised itâ€™s gone on this long, to be perfectly honest. When (Pete) Rose broke (Ty) Cobbâ€™s hit record and when (Cal) Ripken broke (Lou) Gehrigâ€™s consecutive game record, I never thought that would happen either, so itâ€™s going to happen,â€ť the Hall of Fame outfielder told the Boston Globe last week.

â€śThereâ€™s so much more publicity nowadays, people call a report in every day,â€ť the Globe quoted Yastrzemski as saying. â€śIn â€™67, the Triple Crown wasnâ€™t even mentioned. We were so involved I didnâ€™t know Iâ€™d won it until the next day when I read it in the paper.â€ť

That the length of his reign surprises Yastrzemski is, well, not surprising. The Baltimore Orioles' Frank Robinson had done it the year before Yastrzemski. Eleven others have done it also, dating back to Paul Hines of the Providence Grays in 1878. The Red Sox's Ted Williams and the St. Louis Cardinals' Rogers Hornsby each won it twice.

Of course, Major League Baseball was much different 45 years ago than it is today. There were only 20 teams (there are 30 today) and the only playoff was the World Series, which the Red Sox lost to the Cardinals in Yastrzemskiâ€™s triple crown year.

But Yastrzemski said batters of his era had one obstacle to face that todayâ€™s hitters donâ€™t, a pitching mound that was 5 inches higher. The higher mounds gave pitchers an edge on velocity.

â€śIâ€™d like to see what some of the pitchers would throw today, what their speeds would be, if they came off a higher mound. I could see (Justin) Verlander probably throwing 100 mph or more on every pitch,â€ť Yastrzemski told Boston radio station WEEI.

With Cabrera winning Â the triple crown, one historic baseball streak is still standing: Joe DiMaggio's 56-game hitting streak in 1941. No one has come closer than 12 games from that mark since.

And one question will still be outstanding on Cabrera's season: Should he be the league's most valuable player? Yastrzemski was in 1967.

"I think Cabrera's focus has been on his team and winning, not concerns for himself.Â  Playing for your team and having great numbers is an incredible feat,â€ť Eckersley said.

MVP or not, it won't reduce what Cabrera has accomplished this year, says his manager.

"No matter what happens, there are absolutely no flaws in Miguel Cabrera's season. None. Period. End of story,"Â  Leyland said in a CBS Sports report.

TBS will have exclusive coverage of the first-ever Wild Card games on Friday, October 5. The network will also be the exclusive home of up to 18 Division Series games and the entire ALCS.

President Obama and Republican nominee Mitt Romney hold their first debate tonight from the campus of the University of Denver.Â  Watch CNN.com Live for all the latest coverage from the election.

10:30 am ET - Pentagon briefing on Afghanistan - The deputy commander of the International Security Assistance Force will brief reporters on the current situation in Afghanistan.