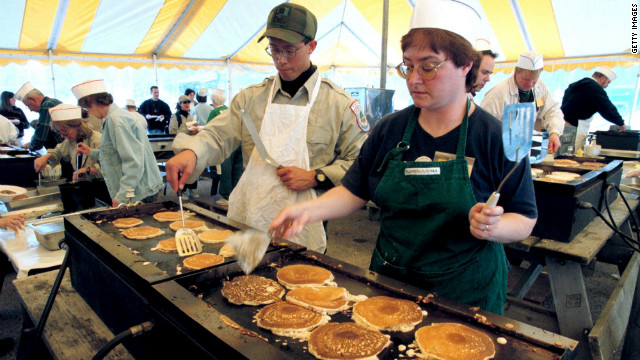 Etienne St.-Pierre, the export company's owner, told the CBC he bought the syrup from one of his regular suppliers, but police hauled it away in trucks. St.-Pierre's attorney, Sarto Landry, said St.-Pierre had no reason to believe the product was stolen, according to the Globe and Mail in Toronto.

‚ÄúWe can‚Äôt easily identify the syrup, it‚Äôs not like buying a car or buying a house,‚Äù he told the paper. ‚ÄúAt the moment, there‚Äôs a presumption that the product that was bought ... was in no way related to a deceitful transaction.‚Äù

It's not known exactly how much syrup was stolen or how much was recovered, but the product originally stored in the Quebec warehouse where the theft occurred was worth more than $30 million, according to the Federation of Quebec Maple Syrup Producers.

The Globe and Mail said the amount seized was 119,000 liters, or about 31,400 gallons, but other Canadian news outlets gave different estimates. Police escorted a convoy of 16 trailer-loads of syrup from New Brunswick to a storage facility in Quebec, the Globe and Mail reported.

Quebec produces 70% to 80% of the world's maple syrup, according to the producers federation.

In an exclusive interview with @cnnsport, Chelsea striker Romelu Lukaku has urged the CEOs of social media companie‚Ätwitter.com/i/web/status/1‚Ä¶El
cnni

8:00 am ET September 23, 2021 RETWEET
There's a 1-in-3 chance Lake Powell, which is located on the Colorado River, won't be able to generate hydropower i‚Ätwitter.com/i/web/status/1‚Ä¶CF
CNNweather

7:56 am ET September 23, 2021 RETWEET
Dinosaurs, like us, got sick and injured. Until relatively recently, however, diagnosing multi-million-year-old di‚Ätwitter.com/i/web/status/1‚Ä¶jC
cnni