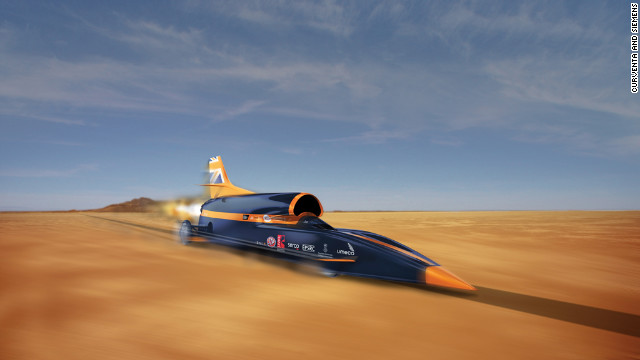 An artist's rendering from Curventa and Siemens shows the BLOODHOUND SSC.
October 4th, 2012
10:41 AM ET

The project is dubbed Bloodhound SSC. Its organizers plan for the pencil-shaped car to be zooming along the South African desert next year and break the world land speed record of 763 mph.

"The initial indications are that it went very well indeed," the rocket's designer, self-taught engineer Daniel Jubb, 28, told the Western Morning News in Cornwall, England, where the rocket was tested inside a hangar at a Royal Air Force base.

Engineers were looking over reams of data from the test to determine their next steps.

Jubb calls the Bloodhound's power plant a hybrid system, but it's not the type you'd find on your uncle's Prius.

It's a hybrid because the rocket uses a solid fuel, which is a synthetic rubber, and turns it into an aerosol with with a high-test peroxide and catalyst of fine silver mesh. The fuel is actually fired into the rocket by a Cosworth engine of the type found in Formula One race cars. Then all that power is combined with the thrust from a jet engine like the ones on Typhoon fighter planes.

The rocket hybrid produced 14,000 pounds of thrust on Wednesday. That's the equivalent of about 40,000 horsepower. The additional thrust from the┬Ā fighter jet engine will give the car a total of 135,000 horsepower. In contrast, the Prius hybrid system produces 134 horsepower. The engine of a NASCAR Sprint Cup race car produces about 750 horsepower. So Bloodhound will have the power of 180 NASCAR cars, or four times the entire starting grid at Talladega Superspeedway this weekend.

Driving the Bloodhound on the South African test track will be Andy Green, a Royal Air Force pilot with experience flying Tornado fighters over Bosnia, Iraq and the Falklands.

The organizers of the Bloodhound project hope to do more than set a land speed record. They're hoping it helps change Britain by inspiring young people to take up engineering.

"It is very important in the UK that we address the shortage of engineers. Less than an hour before we fired that rocket we had children in there asking questions, I hope that helps inspire the next generation," the Western Morning News quoted Jubb as saying.

When the project was launched in 2008, organizers also said it would "also be the catalyst for a raft of cutting-edge research in fields such as aerodynamics, computational fluid dynamics, materials technology, composite manufacturing and sustainable high-tech engineering."

So maybe we'll be motoring around on solid aluminum wheels one day. That's how the Bloodhound will travel. It will be going so fast that it can't use conventional wheels. Instead, the four wheels, two inside the nose and two set outside the frame at the rear, will be made completely of aluminum. They'll weigh about 210 pounds each and spin at 10,000 rpm.

Meanwhile, before the British group can go for a 1,000-mph record, an American outfit hopes to try to push the current mark to beat a bit higher.

North American Eagle says on its website that it plans to run a turbojet-powered vehicle across a Western desert at 771 mph some time this year.