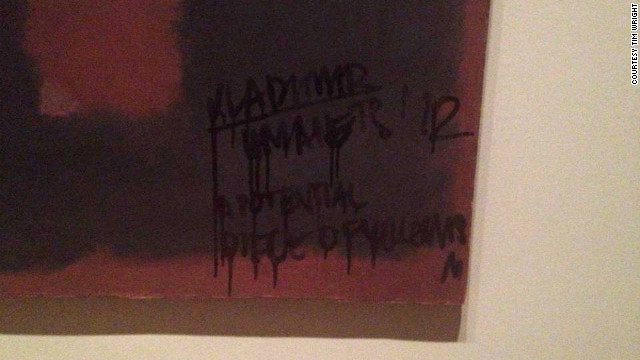 â€śIt was very surreal. It wasnâ€™t something we expected to see. One minute he sat down, and the next minute he put his foot over the barrier,â€ť Wright said of the vandal.

â€śItâ€™s just not the thing you expect to see in an art gallery," Wright said. "Iâ€™ve never seen anything like it. It's quite shocking, actually.â€ť

The defaced painting was a mural from Rothko's famed Seagram series. The Russian-American abstract expressionist was commissioned to do a series of paintings for the Four Seasons restaurant of the Seagram building in New York in 1958. Though he started the series of murals, he famously reneged, deciding the swanky New York restaurant wasn't an appropriate home for his art.

Rothko rejected the commission but completed paintings stemming from the project, many of which made their way into the halls of museums.Â The murals arrived in London as Rothko killed himself in 1970.

The murals have been on display at many of the Tate's locations as well as the National Gallery of Art in Washington.

Rothko's children, Kate Rothko Prizel and Christopher Rothko, said in a statement that they were thankful for the support of others after the incident.

"The Rothko family is greatly troubled by yesterday's occurrence but has full confidence that the Tate Gallery will do all in its power to remedy the situation," the family said. "Our father donated his legendary Seagram paintings to the museum in 1969 sensing the commitment of the institution to his work and impressed by the warm embrace it had received from the British public. We are heartened to have felt that embrace again in the outpouring of distress and support that we and our father have received both directly and in public forums."

Speculation about the culprit's identity is starting to swirl, but police have offered few specifics. A Met police spokesman said the vandal is "a white man aged in his late 20s who subsequently left the scene, and there have been no arrests at this time.â€ť

Ryan Reynolds just broke some Hugh-ge news in the movie world. The actor announced that Hugh Jackman will be repriâ€twitter.com/i/web/status/1â€¦uV
cnni

5:45 am ET September 28, 2022 RETWEET
An Alzheimer's drug called lecanemab slows the progression of cognitive decline by 27% compared with a placebo, druâ€twitter.com/i/web/status/1â€¦hi
cnni

5:30 am ET September 28, 2022 RETWEET
Grammy-winning singer Shakira is one step closer to facing trial in Spain for alleged tax fraud against the Publicâ€twitter.com/i/web/status/1â€¦PP
cnni

5:15 am ET September 28, 2022 RETWEET
M&M's classic rainbow colors were missing their red hue for more than a decade -- here's why the color was discontiâ€twitter.com/i/web/status/1â€¦ue
cnni

5:00 am ET September 28, 2022 RETWEET
Crews in Cuba are working to restore power for millions after Hurricane Ian battered the western region with high wâ€twitter.com/i/web/status/1â€¦SR
cnni

Hurricane Ian strengthens into a Category 4 storm with 140 mph winds as it bears down on Florida cnn.it/3BUqaMq
cnnbrk