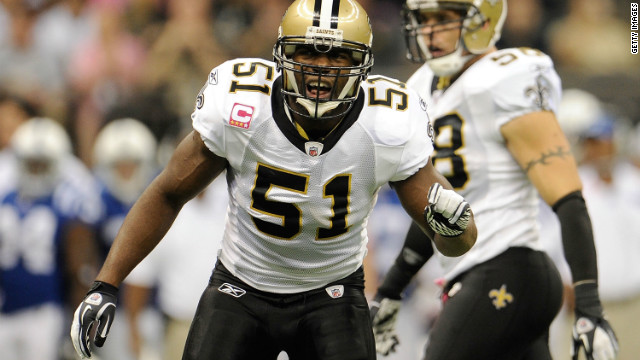 The Saints' Jonathan Vilma will sit out the season after all, according to an NFL decision Tuesday.
October 9th, 2012
05:42 PM ET

The National Football League reaffirmed Tuesday that it would suspend four players in connection with the New Orleans Saints' controversial "bounty" program, a month after the league postponed the suspensions after the players appealed.

Suspensions for two of the players - former Saint and current Cleveland Brown Scott Fujita and free agent Anthony Hargrove - have been reduced. But the suspensions for Saints linebacker Jonathan Vilma (the rest of the season) and defensive end Will Smith (four games) are unchanged.

The league suspended the four in May, concluding that they had leadership roles in the Saints' pay-for-injury program. But the league postponed the suspensions in September after an appeal, with an appeals panel saying Commissioner Roger Goodell would review the punishment and need to clarify the reasons for the punishments.

The delay allowed Fujita and Smith to play the first few games of this season. Although the other two were eligible to play, Vilma is on the Saints' list of those physically unable to perform, and Hargrove has no team.

"In letters to each player and a memorandum to the clubs, Commissioner Goodell clarified that his decision was based entirely on his finding that the bounty program represented conduct detrimental to the league and professional football," the NFL said Tuesday. "The Saintsâ€™ bounty program operated over a three-year period and offered incentives to players for plays including 'cart-offs' and 'knock-outs,' which were plays that caused injuries to opponents."

The following are the new punishments:

Vilma: Suspended for the season, as prescribed previously. He will retain the salary he earned while on the physically-unable-to-perform list during the first six weeks of the season.

Hargrove: Suspended for seven games, down from eight. He will be credited with five games served as a free agent, so he will be suspended only two games when he signs with another team.

Fujita: Suspended for one game, down from three.

The NFL said the decision was made after Goodell met with the players: the "first time those players had agreed to speak directly to the NFL to give their side of the story," according to the league.

The players can appeal the new decision. The players' union, the NFLPA, has opposed the punishments.

The NFL has "failed to produce evidence that the players intended to injure anyone, ever," the NFLPA said Tuesday.

"We will review this decision thoroughly and review all options to protect our playersâ€™ rights with vigilance," the NFLPA said.

The NFL previously suspended Saints coach Sean Payton for the 2012 season while levying an indefinite suspension on former Saints defensive coordinator Gregg Williams, who was accused of masterminding the bonus program.