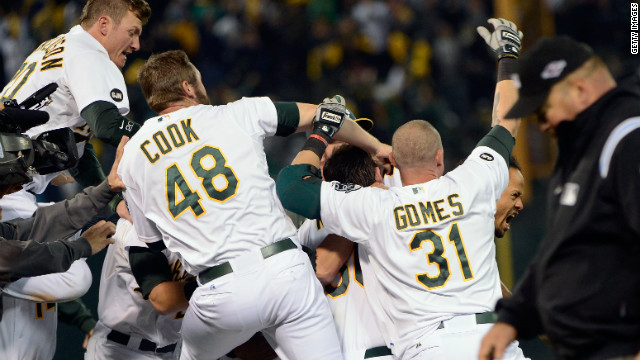 The Oakland Athletics celebrate after their victory over the Detroit Tigers in Game 4 of their AL Division Series.
October 11th, 2012
01:49 AM ET

The Oakland A's kept their unlikely postseason alive by scoring three runs in the bottom of the ninth inning to beat the Detroit Tigers 4-3 in Game 4 of their AL division series.

The final game of the series is tonight in Oakland.

In the ninth, Seth Smith's double drove in two runs to tie the game 3-3 before Coco Crisp singled to right field, bringing home Smith and forcing Game 5, where the A's will have to face Tigers ace Justin Verlander.

The late-game comeback is familiar territory for Oakland, which had 14 victories in its last at-bat this season, most in the major leagues.

In the other playoff series, the Yankees beat Baltimore 3-2 when pinch-hitter Raul Ibanez homered in the bottom of the 12th inning, giving New York a 2-1 series lead; the San Francisco Giants got a solid outing from Tim Lincecum and beat the Cincinnati Reds 8-3 to tie the series 2-2; the St. Louis Cardinals beat the Washington Nationals 8-0 and lead their series 2-1.

All four series are in action today.

Two college students in California had to be rescued from the Pacific Ocean this weekend when they floated too farâ€twitter.com/i/web/status/1â€¦eE
cnni

9:01 pm ET May 10, 2021 RETWEET
The biotechnology company Novavax now plans to apply for emergency use authorization of its Covid-19 vaccine in theâ€twitter.com/i/web/status/1â€¦CR
cnni

8:31 pm ET May 10, 2021 RETWEET
Chef transplants are bringing new flavor to smaller cities and towns in what some industry experts are calling a cuâ€twitter.com/i/web/status/1â€¦KK
cnni

8:17 pm ET May 10, 2021 RETWEET
The White House said there are no issues with fuel supply as officials worked urgently to ascertain the scope and fâ€twitter.com/i/web/status/1â€¦ok
cnni