Former French President Nicolas Sarkozy gets a historic prison sentence for corruption. He can serve one year of aãtwitter.com/i/web/status/1ãÎQN

Britain's Prince Philip has been moved to a new hospital for further treatment for an infection and more tests, offãtwitter.com/i/web/status/1ãÎZs

Two men have been arrested following a manhunt in Georgia that left a deputy in critical condition cnn.com/2021/02/28/us/ãÎ

A US intelligence report on Saudis who were responsible for Jamal Khashoggi's death was mysteriously taken down andãtwitter.com/i/web/status/1ãÎWR

CDC advisers have voted to recommend use of Johnson and Johnson's one-dose coronavirus vaccine for Americans 18 andãtwitter.com/i/web/status/1ãÎHm 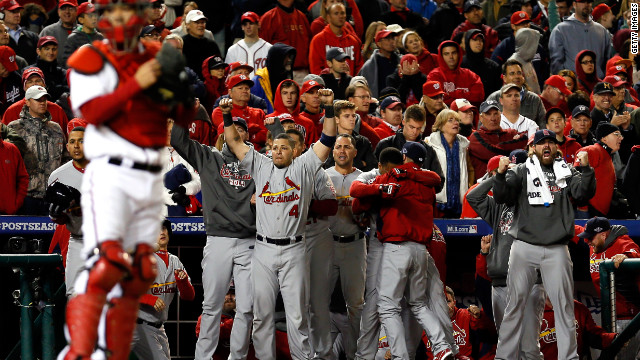 The Cardinals celebrate during their four-run ninth inning.
October 13th, 2012
12:57 AM ET

The baseball playoffs wrapped up the divisional series Friday night, as two more teams took another step on the road toward the World Series.

The St. Louis Cardinals completed a shocking comeback and the New York Yankees got a sterling pitching performance from their ace to advance to their respective league championship series.

St. Louis was down 7-5 entering the ninth inning and staring at elimination, a familiar sight for the defending World Series champs, who - tracing back to the playoffs last season - have won their last six elimination games.

Daniel Descalso had a bases-loaded single off Drew Storen to tie the game 7-7. Pete Kozma singled to right field to bring in two more runs and make it 9-7.

The Nationals went down 1-2-3 in the bottom of the ninth.

St. Louis trailed 6-0 early before it began the long climb back.

"You don't envision yourself being behind 6-0," Descalso said to TBS during the post-game TV broadcast. Descalso had a home run and a double for the Cards.

After getting a run back in the fourth, St. Louis added two more in the fifth. Descalso led off the inning with a double to right. After a single and a walk, he scored on a wild pitch by Gio Gonzalez. They made it 6-3 when Shane Robinson scored on a bases-loaded walk.

St. Louis scored a run in the seventh and eight, setting up its ninth-inning comeback.

The Cardinals will travel to San Francisco, where they'll take on the Giants in the NLCS beginning Sunday night.

CC Sabathia got out of a bases-loaded jam in the eighth inning and threw a complete game as the Yankees beat the Orioles to advance to the AL Championship Series against the Detroit Tigers.

Sabathia was masterful, striking out nine and allowing four hits for the Yankees. "It's what I'm here for," Sabathia told MLB.com.

New York will play host to Game 1 of the ALCS at 8 p.m. Saturday.