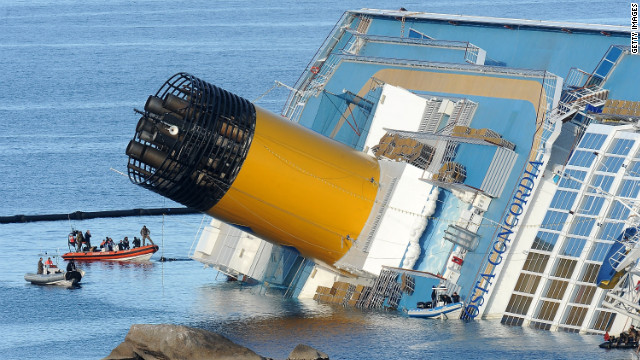 The Costa Concordia cruise ship ran aground off the Italian island of Giglio in January.
October 14th, 2012
04:29 PM ET

President Barack Obama reportedly was disappointed in his own debate performance  against Republican challenger Mitt Romney earlier this month. One of Obama's top advisers says he'll be more rigorous on Tuesday, when the presidential candidates participate in a town hall-style debate in Hempstead, New York, at Hofstra University.

"He knew when he walked off that stage, and he also knew as he watched the tape of that debate, that he has to be more energetic," Robert Gibbs said Sunday on CNN's "State of the Union" to Candy Crowley, who will moderate the debate.

Polls after the October 3 debate showed most respondents thought Romney won the first match-up, and he's achieved a bump in voter-choice polls. CNN's October 9 Poll of Polls, calculated using at least three polls that use CNN-approved methodology, had Romney with a slim lead over Obama nationally, 48% to 47%. Eight days earlier, the Poll of Polls had Obama up by 3 percentage points.

Last week on the campaign trail, Romney appeared buoyed by his debate performance and praised his running mate, Paul Ryan, who debated Vice President Joe Biden. Poll takers were split on who won the Ryan-Biden debate.

Crowley says the town-hall format of Tuesday's event, with undecided voters in attendance, will make it harder for the candidates to dodge questions. Coverage on CNN will begin at 7 p.m. ET Tuesday.

The captain of the wrecked Costa Concordia cruise liner is expected to see survivors of the January wreck and victims' relatives when a hearing - set to determine whether he will go to trial - begins Monday.

Thirty-two people reportedly died when the cruise liner struck rocks and turned on its side off the Italian island of Giglio on January 13. Francesco Schettino could be charged with manslaughter and other crimes at the end of this week's proceedings in Italy.

He was freed from house arrest in July but is still confined to his hometown of Meta di Sorrento while he awaited the hearing, The Telegraph reported.

Officials in the Philippines and Muslim rebels are expected to sign a peace deal Monday, marking a major milestone after decades of militant insurgency in the nation's troubled south that has killed tens of thousands.

The Moro Islamic Liberation Front, which has fought for an independent Islamic state in southern Philippines, has been blamed for rampant attacks in the region. Peace talks have taken 15 years.

President Benigno Aquino III described the deal as a "framework agreement" for establishing a new autonomous region to be administered by Muslims in the south. The new region is expected to replace the current one by 2016.

Could Colombia, FARC move toward peace?

Talks aimed at ending 50 years of fighting between  FARC guerrillas and Colombian forces are expected to take place this week in Norway.

The war between the Revolutionary Armed Forces of Colombia rebel group, commonly known as the FARC, and the Colombian government is Latin America's oldest insurgency. Talks are expected to begin Monday, and a news conference to update progress might be held Wednesday, according to Reuters.

Peace talks between the rebels and the government have occurred sporadically since the 1980s. The last attempt fell apart in 2002. Then-President Andres Pastrana ceded an area the size of Switzerland to the guerrilla group but ended negotiations after rebels launched a series of attacks across the country in an apparent bid to strengthen their position.

The FARC continues to carry out kidnappings and attack security forces, though it has been severely weakened in recent years, thanks in part to a U.S.-backed security campaign.

Quran case against Pakistani girl could be dismissed

A hearing on whether to dismiss the case against a teenage Pakistani girl who was charged with blasphemy for allegedly burning pages of Islam's holy book has been scheduled for Wednesday.

Rimsha Masih, a Christian teenager, has denied the charges. Police arrested Rimsha in August after her neighbor accused her of burning Quran pages for use as cooking fuel, investigators said.

But they then arrested the neighbor, Muslim cleric Khalid Jadoon Chishti,  after witnesses accused the cleric of tampering with evidence to frame the girl. Based on these accusations and other factors, Rimsha's lawyer are trying to get the case thrown out.

However, Chishti has been released on bail after three of four witnesses recanted their statements against him.

Rimsha's case has sparked international outcry against the Pakistani government, with some saying that blasphemy laws are used to settle scores and persecute religious minorities.