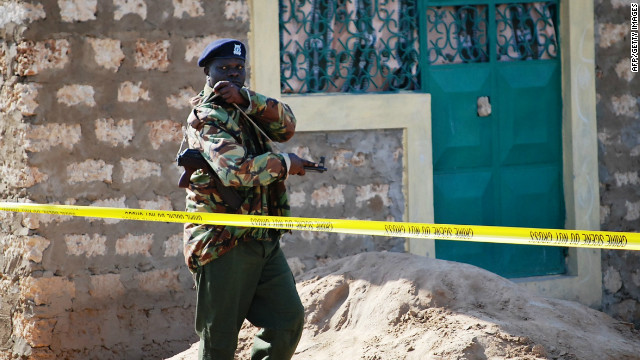 A Kenyan police officer guards the house where the attack took place.
October 17th, 2012
09:38 AM ET

Police knocked on the door in the middle of the night, giving whoever was inside a chance to open it.  But the anti-terrorism squad had come prepared for a raid.

When the militant suspect inside refused to let them in, the officers broke down the door - and were met by a grenade flying straight at them.

The blast injured three officers and killed a suspected criminal who had led them to the home in Mombasa, Kenya's second-largest city and a popular tourist destination.  Police had arrested the suspect earlier, and got him to take them to what he said was a home containing an illegal weapons cache, according to regional police chief Aggrey Adoli.

As the grenade exploded, police began shooting into the doorway, killing the suspected militant who had hurled the explosive at them.

As he fell, he dropped a second grenade he'd been holding. That blast injured five policemen - one of whom who later died due to his injuries.

Inside the house, police recovered two more grenades, a pistol, and 15 rounds of ammunition, Adoli said.

The suspects - both the one who took police to the home and the one who pitched the grenade at them - had no identity cards, Adoli said.  "We cannot rule out that they are enemies from Al-Shabaab who were planning an attack following the fall of Kismayo” in neighboring Somalia, he added.

The al Qaeda-linked militant group Al-Shabaab is trying to overthrow the Somali government, and has also been blamed for violence in Kenya.