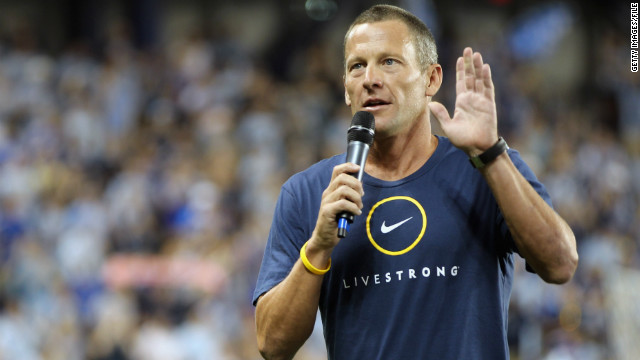 "We have decided not to renew our relationship with Lance Armstrong when our current contract expires at the end of 2012," Paul Chibe, Vice President of U.S. Marketing, Anheuser-Busch said in astatement. "We will continue to support the Livestrong Foundation and its cycling and running events."

"My family and I have devoted our lives to the work of the foundation and that will not change," Armstrong said. "We plan to continue our service to the foundation and the cancer community. We will remain active advocates for cancer survivors and engaged supporters of the fight against cancer. And we look forward to an exciting weekend of activities marking the 15th anniversary of the foundation's creation."

Lance has made this foundation and its cause - aiding people whose lives have been touched by this disease - his life's work. His leadership in the cancer community has spurred immeasurable progress and it has been a great privilege to work shoulder to shoulder with him on a daily basis during his chairmanship.

We are grateful to Jeff Garvey for assuming the responsibilities of chairman. Jeff has been a guiding presence for Livestrong for 15 years and we look forward to a seamless transition under his leadership and a continued strong focus on our core values and mission.

Lance's devotion to serving others whose lives were irrevocably changed by cancer, as his was, is unsurpassable. We are incredibly proud of his record as an advocate and philanthropist and are deeply grateful that Lance and his family will continue to be actively involved with the Foundation's advocacy and service work. We look forward to celebrating 15 years of progress with Lance and his family this weekend and recommitting ourselves to the work of the cancer community for the years ahead."

[Updated at 8:47 a.m. ET] Lance Armstrong is stepping down as chairman of the Livestrong charity "to spare the foundation any negative effects as a result of controversy surrounding my cycling career," according to a statement posted to the group's website.

"In 1996, as my cancer treatment was drawing to an end, I created a foundation to serve people affected by cancer. It has been a great privilege to help grow it from a dream into an organization that today has served 2.5 million people and helped spur a cultural shift in how the world views cancer survivors. This organization, its mission and its supporters are incredibly dear to my heart.

I am deeply grateful to the people of the foundation who have done such hard and excellent work over the last 15 years, building tangible and effective ways to improve the lives of cancer survivors. And I am deeply humbled by the support our foundation has received from so many people throughout the world - survivors, world leaders, business leaders and of course, the cancer community itself. We turn to this community frequently for guidance and collaboration to achieve our shared goals. They are unfailingly generous with their wisdom and counsel and I can never thank them enough.

My duties will transfer to Vice Chairman Jeff Garvey who will serve as chairman. Jeff's guidance and wisdom have been critical to shaping the foundation's work since its earliest days. Jeff was this organization's founding chairman and I have full confidence that under his leadership, the foundation will continue expanding its ability to serve cancer survivors.

My family and I have devoted our lives to the work of the foundation and that will not change. We plan to continue our service to the foundation and the cancer community. We will remain active advocates for cancer survivors and engaged supporters of the fight against cancer. And we look forward to an exciting weekend of activities marking the 15th anniversary of the foundation's creation."