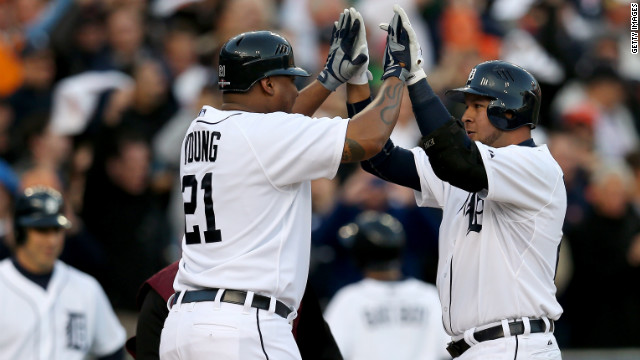 The Detroit Tigers at various times this summer looked like they might not make the playoffs. Now they're going to the World Series.

The underdog Tigers beat the Yankees 8-1 on Thursday evening in Detroit, completing a four-game sweep of the New York club in the American League Championship Series.

Detroit, heading to its second World Series in seven years, will face either the St. Louis Cardinals or the San Francisco Giants next.

Of the five American League playoff clubs, the Tigers had the worst record (88-74). They trailed the White Sox for the Central Division's automatic playoff spot for part of the season, but won eight of their last 10 regular-season games to clinch the division.

A violin-shaped church, an "upside down" house and a hotel modeled on a Russian doll are among the entries in an anâ€twitter.com/i/web/status/1â€¦jy
cnni

11:31 pm ET September 26, 2021 RETWEET
Two Japanese sisters have been confirmed as the world's oldest living identical twins and the oldest ever identicalâ€twitter.com/i/web/status/1â€¦ni
cnni

10:01 pm ET September 26, 2021 RETWEET
Australia has lost about 30% of its koalas over the past three years, with the marsupials hit by drought, bushfiresâ€twitter.com/i/web/status/1â€¦42
cnni