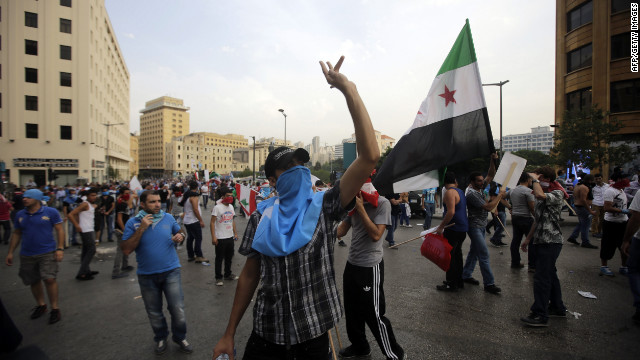 'Day of rage': Gunfire, tear gas in streets of Beirut

[Updated at 10:25 a.m.] Many protesters are calling for the Lebanese government to be dismissed.

[Updated at 10:11 a.m.] Former Lebanese Prime Minister Fouad Siniora, on Lebanese TV, said he understands the feeling of anger, but that violence and attempts to enter the Serial - the government palace - are unacceptable.

[Updated at 9:52 a.m.] Much of the violence appears to have died down.  Video from the scene shows most protesters gathered in a square, chanting and waving flags.

The flags indicate many of the protesters are aligned with the March 14 movement,  the anti-Syrian regime coalition that emerged after the assassination of former Prime Minister Rafik Hariri in 2005. That movement was key in forcing the withdrawal of Syrian troops, which had long occupied neighboring Lebanon and pulled out months after Hariri was killed.

Some protesters accuse Syria of involvement in al-Hassan's assassination.  Syria condemned the blasts very quickly after they happened on Friday.

[Updated at 9:42 a.m.] Tear gas filled streets of Beirut and gunfire could be heard Sunday as furious protesters clashed with police.

Crowds of men - many of them covering their faces with cloths to avoid inhaling the tear gas - wielded sticks and waved flags.  Video showed at least one stick set on fire and tossed over a barrier.

Reports indicated the gunfire may have been authorities shooting into the air in hopes of breaking up the crowds.

Many of the protesters tried to reach the prime minister's office.

The violence came after some politicians had called for Sunday to be a "day of rage" in response to a bombing Friday.

That attack was the country's most high-profile assassination in more than seven years.

Soldiers had carried the flag-draped coffins of  intelligence chief Brig. Gen Wissam al-Hassan and his bodyguard through the streets of downtown Beirut.

Throngs of people had packed the city's central square for the ceremony Sunday.

Friday's attack - in broad daylight, at one of the capital's busiest intersections - left a crater more than a meter deep.