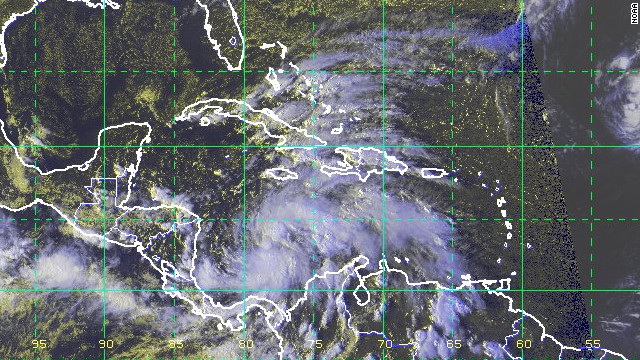 Tropical Storm Sandy has Jamaica in its sights

A tropical storm that developed Monday in the Caribbean Sea is likely to hit Jamaica and Haiti with strong winds and plenty of rain this week, forecasters say.

Tropical Storm Sandy, churning about 395 miles south-southwest of Jamaica on Monday afternoon, could start affecting Jamaica by Tuesday night and cross it or pass close to it on Wednesday afternoon, the U.S. National Hurricane Center said.

Tropical storm conditions also are possible in Haiti, more than 100 miles east of Jamaica, by early Wednesday. The forecast becomes more uncertain after that, but the storm also could affect eastern Cuba and the Bahamas after Wednesday afternoon, the hurricane center said.

The current forecast track, though there is room for deviation, gives the storm a good chance of passing over Haiti on Wednesday afternoon with maximum sustained winds of 70 mph.

A tropical storm watch was in effect Monday afternoon for Jamaica and Haiti. Sandy is expected to drop 5 to 10 inches of rain - with isolated amounts of up to 16 inches - across Jamaica, Haiti, the Dominican Republic and eastern Cuba, the center said.

Sandy comes late in the Atlantic hurricane season, which runs from June 1 to November 30.