A two-dose version of Johnson & Johnson's vaccine is 94% effective against Covid-19, the company says, making it coā€twitter.com/i/web/status/1ā€¦6p

BREAKING: Moscow was responsible for killing Alexander Litvinenko, a Russian spy poisoned in London in 2006, the Euā€twitter.com/i/web/status/1ā€¦EF

A Texas doctor who wrote an op-ed claiming he violated the state's six-week abortion ban now faces a lawsuit broughā€twitter.com/i/web/status/1ā€¦O2 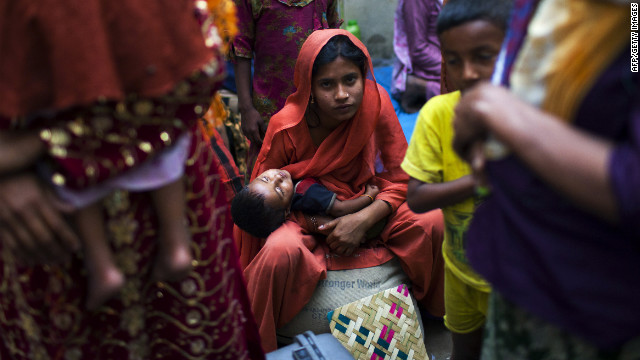 Myanmar refugees from the Rohingya community, a predominantly Muslim sect, take refuge on a street, in this photo taken in May.
October 23rd, 2012
02:51 AM ET

Fresh sectarian clashes in Myanmar's western state of Rakhine killed three people and left more than 400 houses, a monastery and a mosque burned to the ground, authorities said Tuesday.

Authorities have declared at state of emergency in two of the townships, with the state's prime minister instructing that medical teams be accompanied by security personnel when they visit them.

In a new take on vaccine diplomacy, a free mobile Covid-19 testing and vaccination station is welcoming world leadeā€twitter.com/i/web/status/1ā€¦n6
cnni

9:01 am ET September 21, 2021 RETWEET
Thanks to a long-forgotten letter, a woman has uncovered the truth about how her family in Poland rescued and hid tā€twitter.com/i/web/status/1ā€¦Qe
cnni