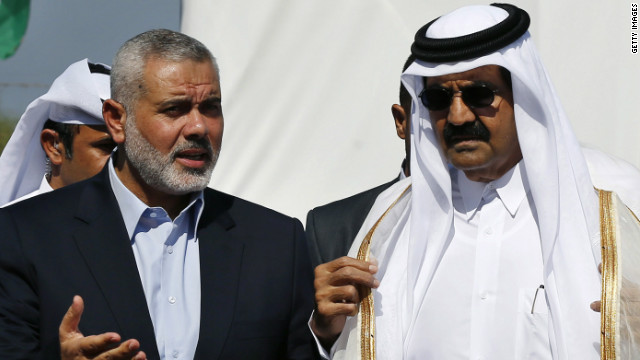 In a statement, the Israel Defense Forces said its aircraft had targeted two rocket-launching squads in northern Gaza as they were being prepared to fire rockets into southern Israel.

It added that more than six rockets had been fired from Gaza at southern Israel during the previous three hours.

"The IDF will not tolerate any attempt to harm Israeli civilians and will operate against anyone who uses terror against the state of Israel," said the statement, which blamed Hamas "for any terrorist activity emanating from the Gaza Strip."

In addition, an IDF officer was moderately wounded while on routine patrol Tuesday adjacent to the security fence in central Gaza, the IDF said. The officer was taken to a hospital, it said.

The attacks occurred the same day that the emir of Qatar, Sheikh Hamad bin Khalifa al-Thani, arrived in Gaza, becoming the first head of state to visit since Egypt and Israel instituted a blockade in 2007.

In Washington, State Department spokeswoman Victoria Nuland said U.S. officials "share Qatar's deep concern for the welfare of the Palestinian people, including those residing in Gaza."

But she expressed continuing concern over the "destabilizing role" of Hamas, which has governed Gaza since 2007.