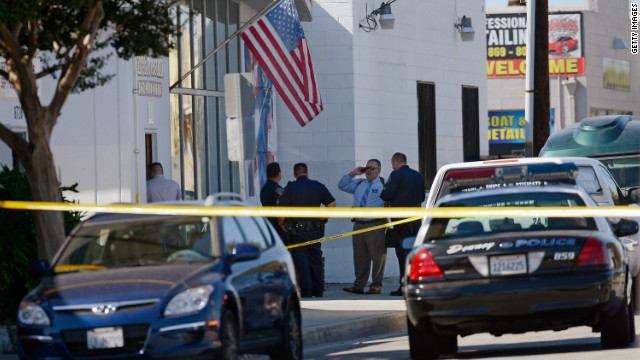 A shooter gunned down five members of a family, killing three, at the family's Los Angeles-area fire extinguisher business and a nearby home late Wednesday morning, police said.

The gunman is on the loose and is considered to be armed and dangerous, said Downey Police Lt. Dean Mulligan.

The shootings started at United States Fire Protection in Downey, California, about 10 miles southeast of downtown Los Angeles, with a 911 call coming in at 11:12 a.m. PT, police said. Of the three people shot there, two - a male and a female - died.

Five minutes after the first call, a 911 call came from the family's nearby home, where a female was fatally shot and a second person was wounded, police said.

The gunman fled in a car owned by one of the victims, according to police. The two survivors - both males - were at a hospital in critical condition Wednesday afternoon.

All five victims are members of a family that runs the fire extinguisher business, though it's not clear whether all five were involved in the business, police said. Their names were not immediately released.

Police didn't release the name of a suspect. The relationship between the gunman and the victims, if any, wasn't immediately clear.

11:55 am ET June 21, 2021 RETWEET
Assault on Democracy: Paths to Insurrection. A deep dive into the lives of some of the people who stormed the Capitâ€twitter.com/i/web/status/1â€¦pS
sarasidnerCNN

11:47 am ET June 21, 2021 RETWEET
More than 100 homes were damaged in the Chicago suburbs Sunday night as a strong storm and at least one tornado movâ€twitter.com/i/web/status/1â€¦BJ
CNNweather

11:15 am ET June 21, 2021 RETWEET
The climate is warming in the US and around the world. Today, climate change advocates and people around the worldâ€twitter.com/i/web/status/1â€¦LM
CNNweather

10:15 am ET June 21, 2021 RETWEET
Severe weather tore across the US this weekend, with more in store this afternoon. cnn.it/3iWeReS https://t.co/ffirlx5FV7
CNNweather