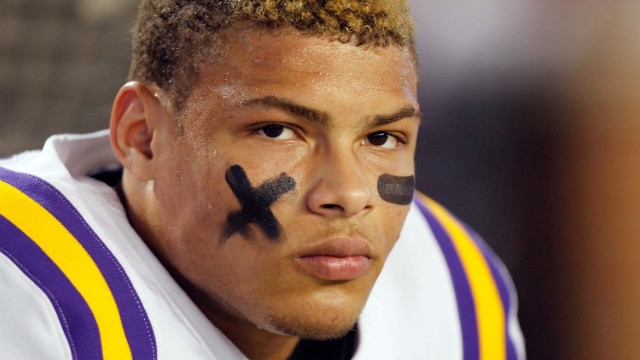 Police initially responded to an apartment complex in the Louisiana city after getting a complaint about a person trying to force his way in through a security gate, the Baton Rouge Police Department announced in a news release.

Officers eventually tracked the man to one apartment unit and knocked, with Mathieu opening the door and consenting to a request to search the apartment, police said.

Police found three other men - one of them allegedly the man whoÂ  tried to force his way past the gate– as well as a marijuana grinder, digital scale and 10 bags of "high-grade marijuana."

"All four men are being booked into the East Baton Rouge Parish prison," police said.

As a Heisman finalist, Mathieu was considered one of college football's five best players last year. But he was dismissed in August from the Tigers by head coach Les Miles, who didn't specify the alleged transgressions but did say, "We have a standard that our players are held to. And when that standard is not met, there are consequences."

A dolphin tour group off the coast of Newport Beach, California, got a special treat: an encounter with a "stampedeâ€twitter.com/i/web/status/1â€¦mg
cnni