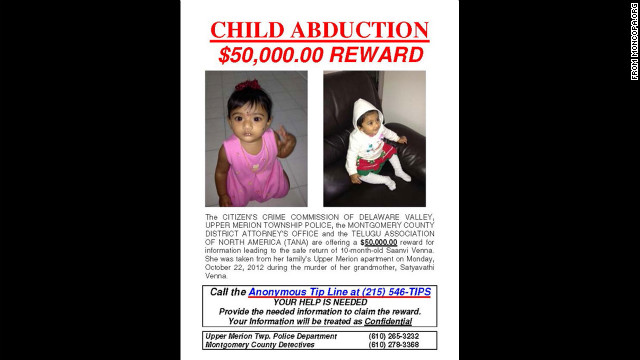 A copy of the reward poster put out after Saanvi Venna went missing earlier this week.
October 26th, 2012
02:08 PM ET

Missing 10-month-old Saanvi Venna was found dead Friday morning, and a friend of her family's has been arrested and charged in her and her grandmother's killings, a Pennsylvania prosecutor said Friday.

Raghu Yandamuri is facing other charges ,including robbery, kidnapping, abuse of a corpse and theft, Montgomery County District Attorney Risa Vetri Ferman said at a press conference. The suspect was planning on kidnapping the child and holding her for ransom, Ferman said.

The baby was reported missing Monday after the body of her grandmother, Satayvathi Venna, 61, was found in her King of Prussia, Pennsylvania, apartment.

"We believe the initial effort was to kidnap the child, not to commit the killings, but that changed very quickly," Ferman said.

She said the baby was suffocated with a handkerchief in her mouth and was stuffed in a suitcase.

The baby's body was found in a sauna in a gym in the basement of the apartment complex where the baby's family and the suspect both lived, Ferman said.

Yandamuri acted supportive of the family during the search for the baby, showing up at a vigil and helping hand out fliers seeking information on the missing child, Ferman said.