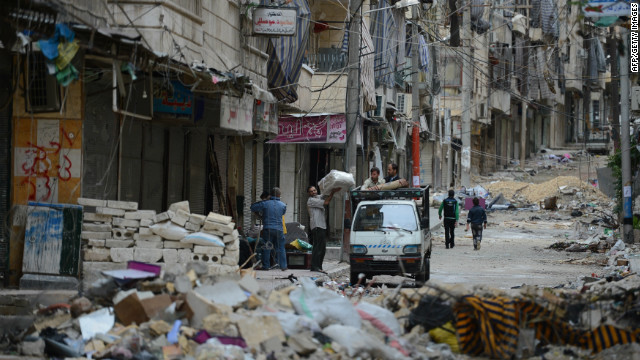 Editor's note: Hours after the beginning of a truce to mark the Muslim holiday of Eid al-Adha, reports of new violence began to emerge in Syria’s civil war. Read the full story.

A car bomb in Damascus killed more than 20 people on Friday, an opposition member said. Abu Osama al-Midani told CNN said the blast occurred in a public square in the Zouhr neighborhood, a largely anti-government enclave. He said a makeshift playground and games and been set up for families celebrating Eid.  Dozens of people including woman and children were in the area at the time. Many people were wounded.

Background: Zouhr neighborhood is an overwhelmingly anti-government neighborhood in central Damascus. However along the main street many pro-regime Allawi family live.

[Updated at 11:50 a.m. ET] The death toll in Syria on the first day of the Eid truce now stands at 50, the opposition Local Coordination Committees said. Sixteen of those deaths occurred in Damascus and its suburbs and 10 others were in Idlib province. Deaths were also reported in Aleppo, Deir Ezzor, Homs, Daraa, and Hama provinces. The LCC counted 110 breaches of the truce by the government.  Also, Syrian state TV reported five deaths and 32 injuries in a Damascus "terrorist bombing."

[Updated at 10:17 a.m. ET] The Syrian Armed Forces said that "terrorist groups" have violated the Eid cease-fire in several cities Friday morning. In a statement read on Syrian state TV, the forces said several military outposts were attacked. The military said it responded "with an effort to resist the assault by terrorist groups." At least 30 people have died across Syria on Friday, the opposition Local Coordination Committees of Syria said.

[Updated at 9:05 a.m. ET] Deaths mounted Friday in Syria despite efforts to impose a truce, an opposition group said. At least 30 people have been killed on the first day of Eid, the Local Coordination Committees of Syria said. Ten deaths occurred in the northern province of Idlib. Others died in Damascus and its suburbs and in the provinces of Daraa, Homs, and Aleppo. The LCC said it has documented 100 Eid truce violations.

[Updated at 7:43 a.m. ET] A Syria-based network of opposition activists said 20 people were killed across the country in the first hours of the truce Friday.

[Updated at 4:39 a.m. ET] Fierce clashes between government forces and al Qaeda-linked al Nusra Front are being reported near a military base east of the northern city of Maaret al-Numan, the Syrian  Observatory for Human Rights said. The al Nusra Front announced two days ago it would not abide by the terms of a cease-fire.

Another violation of the cease-fire was reported in Homs, with the rights group saying government forces were shelling a neighborhood in that flashpoint city.

[Updated at 3:39 a.m. ET] The temporary truce appears to be holding in Syria even as the Syrian Observatory for Human Rights reported that three people were injured when government forces tried to break up a protest.

The injuries occurred in the town of Inkhil in Dara province when government forces fired shots in the air to disperse demonstrators, the rights group said.

[Posted at 3:14 a.m. ET] There was no immediate word whether a temporary cease-fire took hold Friday morning in Syria between government forces and the main rebel group, the Free Syrian Army. The two sides agreed to halt fighting during the Muslim holiday of Eid al-Adha, which begins Friday and runs through Monday.

Syrian President Bashar al-Assad led morning prayers at a mosque in the capital of Damascus to mark the start of the Eid celebration. The live broadcast on Syrian state-run TV showed al-Assad and a number of his ministers in prayer.

Observers have been skeptical about the temporary truce negotiated by a U.N.-Arab League envoy Lakhdar Brahimi. In April, a cease-fire negotiated by Brahimi's predecessor lasted barely a day before the killing resumed.