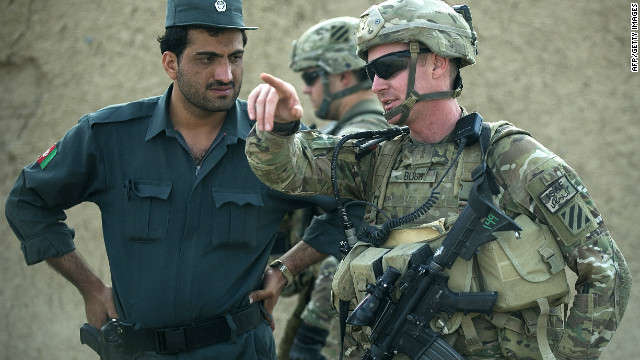 An Afghan police officer and a U.S. soldier talk near Kandahar Airfield earlier this year.
October 30th, 2012
08:03 AM ET

Insider attacks by Afghan soldiers and police officers - or militants wearing uniforms - have been on the rise for months.

More than 50 people have been killed in Afghanistan in similar attacks this year. The Afghan government calls the killings acts of terrorism.

The so-called "green-on-blue" attacks have triggered concerns about the stability of Afghan security forces ahead of planned NATO withdrawals in 2014.

No more details were immediately available about the gunman in Tuesday's attack.

The dead soldiers were identified as members of the Royal Gurkha Rifles - a British army regiment. Military sources said the soldiers' next of kin had been informed.

“I am saddened to report the deaths of two soldiers from 1st Battalion The Royal Gurkha Rifles who were shot and killed by a man wearing an Afghan police uniform at a checkpoint in the Nahr-e Saraj district of Helmand Province," said Maj. Laurence Roche, Task Force Helmand spokesman.

“The loss of these soldiers is a huge blow to the Royal Gurkha Rifles and everyone serving in Task Force Helmand. Our thoughts are with their families, friends and fellow Gurkhas at this time.”