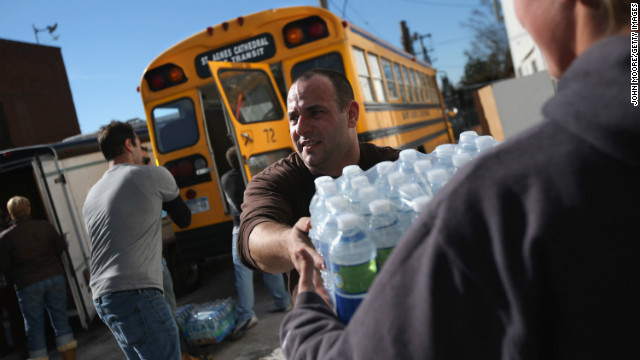 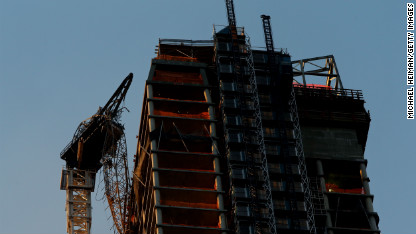 [Updated at 8:30 p.m.] More than 1.5 million customers were still without power on Sunday night, six days after Sandy slammed into the U.S. East Coast, according to data from utilities. More than 900,000 of those outages were in New Jersey, with about half a million in New York.

[Updated at 6:07 p.m.] An estimated 27% of stations in metropolitan New York - which includes parts of Connecticut, New Jersey and New York state - do not have gas for sale, the U.S. Energy Information Administration reports. This is down from roughly 38% on Saturday and 67% on Friday, when significant power outages and a dearth of gas led to hours-long lines at stations that were open for business.

Whereas the U.S. Energy Information Administration reported no gas in 67% of metropolitan New York stations on Friday, the federal agency estimated that figure plummeted to 38% on Saturday.

[Updated at 5:46 p.m.] CNN's "Reliable Sources" looks at the role social media played in coverage of Sandy and its aftermath:

[Updated at 5:40 p.m.] Another 11 stocked U.S. military planes were set to arrive today at Stewart Air National Guard Base, about 60 miles north of New York City, the Defense Department said. Already, some 117 power restoration vehicles and 244 technical personnel have been flown to the same base. In addition, two C-130 planes will fly to eastern West Virginia with blankets that will be turned over to FEMA.

[Updated at 5:24 p.m.] While there are schedule modifications and possible delays, Amtrak trains should operate Monday morning throughout the Northeast and mid-Atlantic. That includes Acela Express and Northeast Regional service "with reduced frequencies," and Empire Service between New York and Albany on a "modified schedule." Long-distance trains "will operate normally" in and out of New York City, Amtrak said.

[Updated at 5:08 p.m.] The overall U.S. death toll from Sandy is 110, after New York police revised the number of fatalities from that city. The Police Department said the city's number of "storm-related deaths reverted to 40 today, after one fatality was determined not to have been caused by the storm." Some 179 fatalities in the United States and elsewhere can be traced to the storm.

Who are the victims of Superstorm Sandy?

WalMart's donation includes 5,895 cases of cleaning supplies and 2,051 board games. PepsiCo, meanwhile, is sending more than 100,000 cases of items such as Aquafina, Mountain Dew and Doritos, with a promise of 22 more trailer trucks full of goods later this week.

[Updated at 4:12 p.m.] About 164,000 Connecticut, New York and New Jersey residents have applied for federal assistance from FEMA, which has already approved more than $137 million in direct assistance for those in need, the White House said today. Some FEMA personnel are on the ground in the affected region.

[Updated at 4:05 p.m.] New York Lt. Gov. Robert Duffy engages in discussions in Lindenhurst, on Long Island's southern coast, about how to help residents hit hard by the storm:

[Updated 1:20 p.m.] New York State may allow voting past Tuesday, since so many people's lives have been disrupted by Superstorm Sandy.

"To my knowledge this has never happened in New York," board spokesman Thomas Connolly said.  "Will the turnout be low?  It’s hard to say - probably, it all depends if people have other priorities.”

[Updated 11:52 a.m.] More than 10,000 people across nine states spent last night in 123 shelters operated by the Red Cross, the agency told CNN.  The American Red Cross has 5,000 personnel in the region stricken by Superstorm Sandy, and is moving 80,000 blankets in ahead of colder weather expected this week.

[Updated 11:38 a.m.] Superstorm Sandy is now blamed for at least 111 deaths in the United States. The figure includes 48 in New York, 24 in New Jersey, 11 in Maryland, four in Connecticut, two in Virginia, six in West Virginia, one in North Carolina, one on the HMS Bounty, and one in New Hampshire, according to officials in the affected states.  It also includes 13 deaths in Pennsylvania, according to coroner reports.  The Pennsylvania Emergency Management Agency says it has confirmed that seven of those 13 are storm related; the other six remain under review.

There were also two deaths reported in Canada and 67 in the Caribbean, bringing the overall death toll to 180.

[Updated 11:23 a.m.] The New York City Board of Elections has decided to temporarily relocate or combine some polling locations across all five boroughs because of damage from Superstorm Sandy.

Conditions are similar in stricken parts of other states.

New York Mayor Michael Bloomberg said he plans to take the subway on Monday, a sign that transit is coming back.

And with the presidential election coming Tuesday, Bloomberg vowed, "We'll do anything we can to help the board of elections."