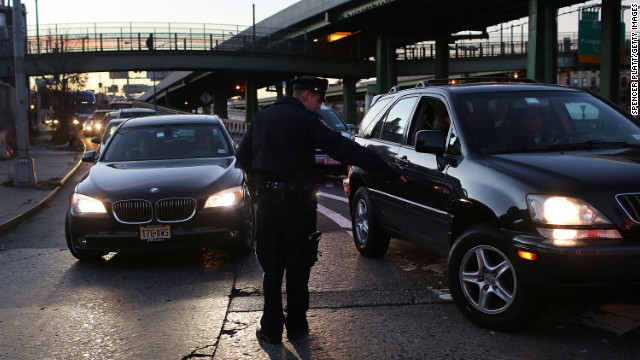 A New York police officer checks that at least 3 people are inside cars before they enter the Brooklyn Queens Expressway, per Sandy-related carpool limits. While such duties kept police busy, crime overall was down 27% in the past week.
November 5th, 2012
06:30 PM ET

Over the past week, New York City police have been plenty busy helping those in the five boroughs deal with the aftermath of devastating floods, major wind damage and widespread power outages. But they might be able to thank Superstorm Sandy for one thing: a drop in crime.

Comparing the most recent seven-day stretch with the same period last year, the New York Police Department today reported a 27% decrease in crime since the storm hit. In raw numbers, that translates to 1,509 alleged crimes compared to 2,164 in November 2011.

This is despite 123 storm-related arrests documented by the department, including 54 for alleged burglaries and 41 related to issues involving frustrated drivers as they waited (sometimes for hours) for gas.

There were double-digit drops in several crime categories, led by an 86% drop in murder arrests. (Of course, Sandy was lethal -Â  causing 40 deaths in the city alone.)

Detentions tied to grand larceny were lower by 47% (20% for automobiles), rape-related arrests fell by 41%, alleged robberies were down 21%, and there were 19% fewer felonious assault cases.

The only major class of crimes in which there were more arrests were burglaries, and even then it was just a 6% jump.

Uber wants to make booking a ride in India as easy as sending a WhatsApp message. cnn.it/3Dpp1LM
cnni

3:01 am ET December 5, 2021 RETWEET
â€śI promise you itâ€™ll go away if you just keep at it, OK?â€ť US President Biden offered some words of encouragemetwitter.com/i/web/status/1â€¦BZeEn6Cb
cnni

2:01 am ET December 5, 2021 RETWEET
Shelby Hoefling surprised her 96-year-old grandma, Patricia, with a trip to New York City and tickets to see the Roâ€twitter.com/i/web/status/1â€¦vo
cnni

1:01 am ET December 5, 2021 RETWEET
The world's first living robots, known as xenobots, can now reproduce â€” and in a way not seen in plants and animalstwitter.com/i/web/status/1â€¦5u4w
cnni

12:01 am ET December 5, 2021 RETWEET
"So glad to be back home." Woody, a creepy yet charming talking Christmas tree with a face, has returned to a Novaâ€twitter.com/i/web/status/1â€¦0K
cnni