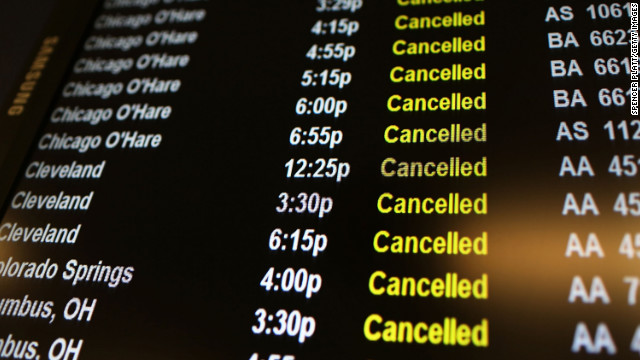 Hundreds of flights canceled because of nor'easter

[Updated at 8:46 p.m.] A wintry mix of heavy rain, wind and snow hitting the weary East Coast a week after Superstorm Sandy prompted a cancellation of hundreds of flights in the New York and Philadelphia regions.

More than 780 flights have been canceled in the New York City area's three major airports, said Chris Valens, a spokesman for the Port Authority of New York and New Jersey. Still, the airports were open, "and we expect that they will stay open," Valens said.

About 150 flights were canceled at Philadelphia International Airport, an airport representative said.

The storm was pounding the New York area Wednesday afternoon and evening, and forecasters predicted wind gusts of up to 60 mph in shore towns and cities across New York and New Jersey, with 2- to 4-foot storm surges just as homes and office buildings dry out and flood waters recede after Superstorm Sandy. More than 600,000 households have been without power for more than nine days, and the latest storm has residents preparing for a long and cold night.

Displaced residents are struggling to stay warm with generators and blankets. Tuesday night, about 8,500 Sandy victims were forced to take refuge in more than 100 Red Cross shelters. By Wednesday night, temperatures could again dip into the 20s, forecasters said.

The latest storm prompted New York Mayor Michael Bloomberg to encourage drivers to stay off roads after 5 p.m. The storm would produce minor coastal flooding in low-lying areas under normal conditions, but because Sandy weakened trees and caused extensive damage, the current storm presents "an increased risk of more downed trees and tree limbs, as well as windblown debris," he said.

Bloomberg did not order an evacuation like he did last week during Superstorm Sandy, but ordered beaches and parks closed until the storm had passed.

For more information about the storm and how East Coast residents are coping, check out this story.

A southern Pennsylvania school board has reversed its decision to ban anti-racism books and resources. The reversaâ€twitter.com/i/web/status/1â€¦6o
cnni

9:18 pm ET September 23, 2021 RETWEET
Customs and Border Protection targeted US citizens, including journalists and attorneys, during the Trump administrâ€twitter.com/i/web/status/1â€¦d9
cnni