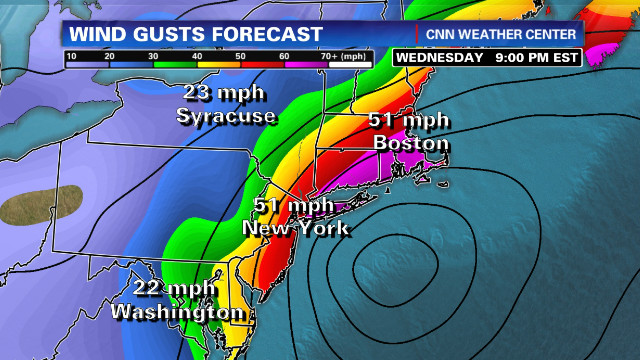 "The city is taking significant precautions in advance of the storm, including halting all construction, closing all city parks, encouraging drivers to stay off the road after 5:00 PM, or to use extreme caution if they have to drive and employing door-to-door operations to urge people without heat to take shelter to stay warm," Bloomberg's office said in a statement.

The mayor warned that just because this storm isn't as bad as Sandy, it will likely compound issues created by the superstorm.

"While this storm is significant, under normal circumstances, it would likely result in minor coastal flooding in low-lying areas, and the normal risk of downed trees associated with these types of storms," his statement said. "Because Hurricane Sandy weakened trees and caused extensive damage and debris, the predicted wind speeds present an increased risk of more downed trees and tree limbs, as well as windblown debris. All New Yorkers are urged to stay indoors during inclement conditions."

And in some of the areas hardest hit by Sandy - Breezy Point, the beaches of New York and New Jersey - there are added concerns.

"In light of the beach erosion and other damage caused by Hurricane Sandy, some of the lowest-lying areas in the city – particularly the areas flooded by last week’s storm – are vulnerable to storm surge today," Bloomberg's statement said.

"No general evacuations have been ordered, but if you experienced significant flooding during Hurricane Sandy, you should consider taking shelter with family and friends who do not live in low-lying areas, or go to one of the city-run storm shelters."