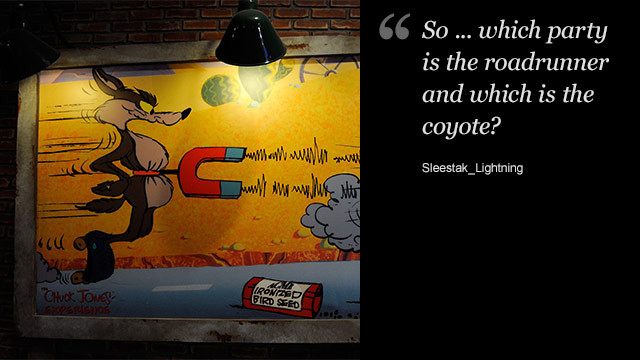 Editor's note: We regularly highlight thought-provoking comments from CNN's readership and audience. Some posts are edited for length and clarity.

You may recall the old Looney Tunes and Merrie Melodies cartoons in which Wile E. Coyote was pursuing the Road Runner. Those ACME products never seemed to do the trick for the poor coyote, who would end up bounding off exaggerated red-rock cliffs and hanging in mid-air. Cartoon physics would eventually bring him down, but he would always survive.

Compare that to theÂ fiscal cliffÂ looming over the U.S. government right after the 2012 presidential election.Â Congress faces an end-of-the-year deadline to address spending cuts, Bush-era tax cuts, other tax breaks and the so-called process of sequestration. Automatic across-the-board spending cuts could trigger at the beginning of 2013 if Capitol Hill fails to create a deficit-reduction plan.

CNN's story drew nearly 8,000 comments from readers.Â Sleestak Lightning's colorfulÂ cartoon referenceÂ asks an interesting question: "Which party is the roadrunner and which is the coyote?"

Do you agree with the Looney Tunes comparison? What do you think needs to be done? How much does the fiscal cliff concern you? Share your thoughts in the comments area below or post a video on CNN iReport.

9:01 pm ET October 24, 2021 RETWEET
A barrage of threats is unfolding across the US this week, including a "bomb cyclone" and a potential nor'easter cnn.it/2ZgqGoG
CNNweather

8:55 pm ET October 24, 2021 RETWEET
We have emitted so much CO2 into the atmosphere that people have built giant fans to suck it back out, in the hopeâ€twitter.com/i/web/status/1â€¦S3
cnni