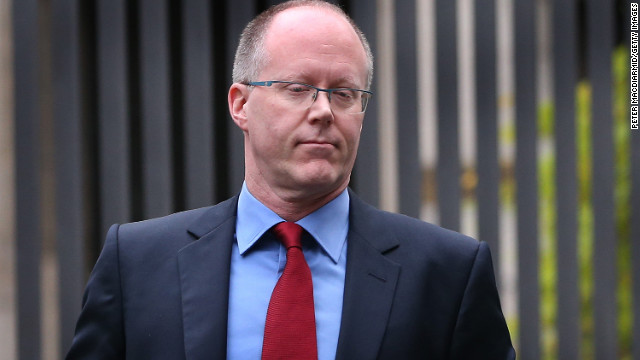 "The wholly exceptional events of the past few weeks have led me to conclude that the BBC should appoint a new leader," George Entwistle said Saturday.
November 10th, 2012
04:22 PM ET

George Entwistle, director general of the British Broadcasting Corporation, said Saturday that he would step down amid controversy over the broadcasting of false claims by a sex abuse victim.

"When appointed to the role, with 23 years experience as a producer and leader of the BBC, I was confident the trustees had chosen the best candidate for the post," he said. "However, the wholly exceptional events of the past few weeks have led me to conclude that the BBC should appoint a new leader."

The BBC has issued a formal apology for broadcasting false claims by a sex abuse victim that a senior political figure of the 1980s had abused him, in the latest in a series of painful missteps by the UK public broadcaster.

The BBC did not name the alleged abuser, but the allegations on its flagship Newsnight program sparked a furor of Internet speculation over who the perpetrator, described as a high-up figure in the government of former Prime Minister Margaret Thatcher, might be.

The broadcaster's apology Friday came hours after Lord McAlpine, who was treasurer of the Conservative Party from the late 1970s until 1990, responded to the online speculation with a statement vehemently denying any involvement.

McAlpine, who now lives in Italy, threatened legal action against those who had wrongly alleged he was the person responsible for the abuse.