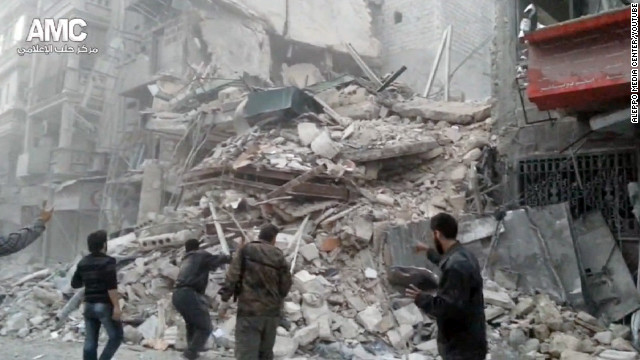 Civilians gaze at the ruins of a hospital reportedly struck Wednesday by Syrian government forces in the city of Aleppo.
November 21st, 2012
07:16 PM ET

At least 40 people were killed in an airstrike late Wednesday on a hospital in the besieged city of Aleppo, Syria, a rebel leader there told CNN. Read the full story here. Get updates on this developing story below:

[7:43 p.m.] - Counting the deaths reported at the hospital in Aleppo, the Local Coordination Committees of Syria, a network of opposition activists, reports a total 108 deaths in the country on Wednesday.

[7:21 p.m.] - Ralib al-Omar, with the Yusif al-Asma rebel group, said the attack targeted the Dar al-Shifa Hospital and that the dead included two nurses. Video posted by activists showed a collapsed building adjacent to the hospital.

Full roundup of news out of Syria on Wednesday