Photos taken in Rossano showed what had once been a Fiat Multipla impaled against the front of the train - mangled and largely unrecognizable - as firefighters walked along the track.

A rescuer described the scene as "appalling," according to the official ANSA news agency.

Four people were injured Saturday after a flash fire broke out in the ductwork of the State Department building in Washington, fire officials said.

The fire broke out after 11 a.m., as construction crews were working on the premises, and was extinguished on short order, said Lon Walls, a spokesman for Washington's fire department. 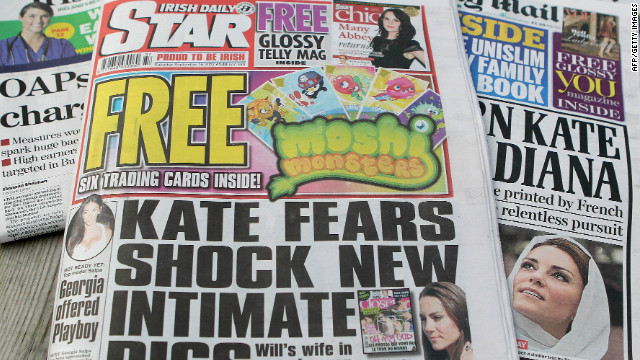 The front page of the September 15 edition of the Irish Daily Star touts topless pictures of the duchess of Cambridge.
November 24th, 2012
03:13 PM ET

The editor of the Irish Daily Star resigned Saturday "as a result of the publication on 15 September 2012" of topless photos of the duchess of Cambridge, according to a statement from the paper.

The images showed Catherine Middleton, the wife of Britain's Prince William, sunbathing, igniting a firestorm of controversy in the British media and stern comments from Buckingham Palace.

The editor, Michael O'Kane, had been suspended earlier after the September 15 edition hit the newsstands.