Human error is to blame in last week's gas-fueled explosion that ripped through a strip club in the western Massachusetts city of Springfield, officials said Sunday.

The blast injured at least 21 people, including firefighters.

A utility worker, responding to a report of a gas odor inside a building, inadvertently punctured a hole in a high-pressure gas line at the foundation of that building, according to a statement from the Office of the State Fire Marshal.

Markings on the sidewalk incorrectly indicated where the line was.

Once the pipe was punctured, the worker called the gas company and the fire department to shut off the gas, and the area around the building was evacuated. Investigators believe gas from the leak entered the building and later ignited.

Two bombs killed at least 11 people and wounded 30 in a church inside the military barracks in Jaji, Nigeria, on Sunday.

Armed Forces spokesman Lt. Col. Muhammad Dole said a suicide bomber drove a vehicle into the side of St. Andrew Military Protestant Church and exploded a bomb at about noon. A second vehicle exploded just outside the church several minutes later. 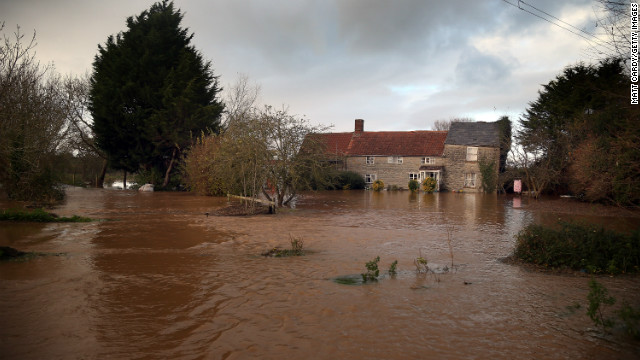 A home in the village of North Curry was surrounded by rising waters as four days of rain began to fall this past week.
November 25th, 2012
09:59 AM ET

Days of heavy rain have led to flooding in southwestern England and parts of Wales and at least one fatality, British authorities said Sunday.

The UK Environment Agency posted a severe flood alert for the town of Helston, in the southwestern county of Cornwall, where the River Cober was rising over its banks, and warned towns across England and Wales to prepare for more high water.

In Exeter, in neighboring Devon, a woman was killed when a tree fell on her Saturday night, the Devon and Cornwall Police Service reported.

On Twitter, Prime Minister David Cameron called the scenes of flooding "shocking" and said his government would make sure "everything is being done to help."

The region has seen four days of non-stop rainfall that has capped months of heavy precipitation, including the wettest April-June period on record. More than 225 areas stretching from Cornwall through the Midlands region to the northeastern coast were under flood warnings Sunday afternoon as the latest system moved through, the Environment Agency said.

The northeast Spanish region of Catalonia is voting for president and a regional parliament Sunday in elections considered a barometer of rising independence sentiment.

Independence is not on the ballot Sunday, but the incumbent Catalan president, Artur Mas, is expected to be re-elected and has vowed to hold a referendum on self-determination in his next term.

The Spanish government in Madrid vows to block any referendum, arguing that the constitution does not permit a region alone to decide its independence.

A January 6 rioter and alleged White supremacist was convicted Friday on all five charges he faced after hitching hâ€twitter.com/i/web/status/1â€¦WR
cnni

5:30 pm ET May 27, 2022 RETWEET
RT @Acosta: TX Gov. Abbott at Uvalde news conference on what he was told about school shooting: "I was misled... I am livid."
sarasidnerCNN

5:02 pm ET May 27, 2022 RETWEET
The Artemis I mega moon rocket is getting ready for its latest attempt at a final prelaunch test, according to an uâ€twitter.com/i/web/status/1â€¦Az
cnni