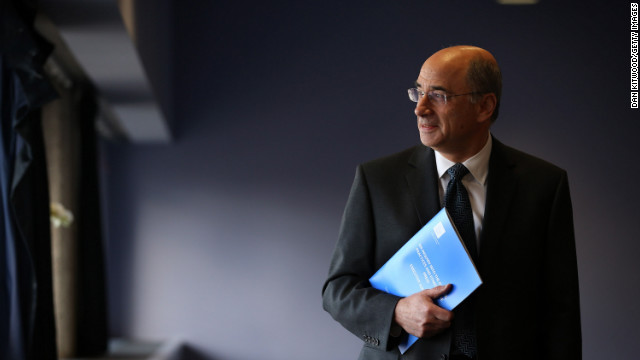 "We are grateful to Lord Justice Leveson for his thorough and comprehensive inquiry, and will be studying its recommendations and comments in detail. As a company we are keen to play our full part, with others in our industry, in creating a new body that commands the confidence of the public. We believe that this can be achieved without statutory regulation - and welcome the Prime Ministerâ€™s rejection of that proposal. We accept that a new system should be independent, have a standards code, a means of resolving disputes, the power to demand prominent apologies and the ability to levy heavy fines. We have spent 18 months reflecting upon these issues and are determined now to move on as soon as possible with others in our sector to set up a new body that will ensure British journalism is both responsible and robustâ€ť.

"A free press is essential to a functioning democracy. The press must be able to hold the powerful - especially us politicians - to account without fear or favor. ...

"But at the same time, I do not want to live in a country where innocent families like the ... Dowlers can see their lives torn apart simply for sake of profit, and where powerful interests in the press know they won't be held to account ..."

The Dowler family was at the center of a phone-hacking scandal that triggered the Leveson inquiry. In 2002, the voice mail of a missing 13-year-old girl, Milly Dowler, had been hacked by an investigator working for the News of the World newspaper before she was found murdered.

[Updated at 11:14 a.m. ET, 4:14 p.m. GMT] Labour Party leader Ed Miliband says that he'll seek to convince British Prime Minister David Cameron and the House of Commmons that "we should put our faith in the recommendations of Lord Justice Leveson."

Miliband was reacting to Cameron's concerns. Cameron had said he backed Leveson's call for a new independent regulator for the press, but was wary about writing legislation to implement it.

"I'm sorry that the prime minister is not yet there," Miliband said in the House of Commons, "but I hope to convince him over the days ahead."

"I have some serious concerns and misgivings on this recommendation. They break down into issues of principle, practicality and necessity. The issue of principle is that for the first time, we would have crossed the Rubicon of writing elements of press regulation into the law of the land. We should, I believe, be wary of any legislation that has the potential to infringe free speech and a free press."

[Updated at 10:30 a.m. ET, 3:30 p.m. GMT] British Prime Minister David Cameron, speaking in the House of Commons, says he backs a judge's call for a new independent regulator for the press and that it should be put in place rapidly.

But Cameron said he had serious concerns about Leveson's recommendation that new legislation be passed to form the regulatory body. Other options should be explored first, Cameron said.

Leveson said he was not recommending that Parliament set up a press regulator, but rather that the industry set up its own regulator, backed by legislation to make sure it meets certain standards.

[Updated at 9:50 a.m. ET, 2:50 p.m. GMT] A central recommendation from Leveson is that there should be an independent regulator with the power to fine the media. But he adds that the regulator should be set up by media organizations, not the British Parliament.

Here's our latest full story that explains more aboutÂ the Leveson report, the evidence and the recommendations for the British media industry.

[Updated at 9:40 a.m. ET, 2:40 p.m. GMT]Â Obviously this is being closely watched by British journalists and media companies. A look at how they're covering it right now is interesting.

The Sun, sister newspaper to the now-defunct News of the World that was at the center of the original phone-hacking allegations, has the story on its web homepageÂ but it's below these headlines: "Pills made me gay sex addict; Darts ace: I'm a celeb writty... and Messi v. Ron (and Iniesta!)

But it's the top story on The GuardianÂ (Leveson report calls for new press law); The TelegraphÂ (Leveson attacks 'outrageous' press behavior) and The Times (Latest: Leveson – laws must regulate press). The Times, like The Sun, is owned by Rupert Murdoch's News International.

And here they all are:

Â There's definitely some damning material in this report.

"The evidence placed before the Inquiry has demonstrated, beyond anyÂ doubt, that there have been far too many occasions over the last decadeÂ and more (itself said to have been better than previous decades) whenÂ these responsibilities, on which the public so heavily rely, have simplyÂ been ignored. There have been too many times when, chasing the story,Â parts of the press have acted as if its own code, which it wrote, simplyÂ did not exist. This has caused real hardship and, on occasion, wreakedÂ havoc with the lives of innocent people whose rights and liberties haveÂ been disdained. This is not just the famous but ordinary members of theÂ public, caught up in events (many of them, truly tragic) far larger thanÂ they could cope with but made much, much worse by press behaviour that,Â at times, can only be described as outrageous," Leveson writes.

To catch you up, this is the British inquiry sparked by allegations of phone-hacking at Rupert Murdoch's News of the World tabloid newspaper that has since shut down. But many more people and papers were also questioned about their practices, which included the hacking and allegations that police officers were too cozy with newspaper journalists.

[Updated at 8:52 a.m. ET, 1:52 p.m. GMT]Â We're listening to Leveson and going through his report now. Here's the executive summary from Leveson's report.

[Updated at 8:45 a.m. ET, 1:45 p.m. GMT]Â The British press should have an independent regulator, underpinned by law, and with the power to fine, Judge Brian Leveson recommended in a long-awaited report sparked by a phone-hacking scandal at Rupert Murdoch's News of the World tabloid.

[Posted at 8:43 a.m. ET, 1:43 p.m. GMT]Â British journalists are getting their first look at what seems to be a scathing report about practices used by the newspaper industry that included hacking into voicemail accounts of celebrities, politicians and murder victims and their families.

We'll bring you information from the report by Judge Brian Leveson and reaction.