Guatemalan official: McAfee detained, could be deported to Belize

Software mogul John McAfee could be deported to Belize Thursday after being detained by immigration officials, a Guatemalan official said.

Authorities took McAfee into custody Wednesday, said Francisco Cuevas, a spokesman for Guatemala's president, Otto Perez Molina. He is accused of being in Guatemala illegally.

After weeks in hiding, the 67-year-old Internet security pioneer emerged publicly Tuesday in Guatemala's capital, hundreds of miles from the Caribbean island in Belize where his next-door neighbor was found dead.

Guatemala's foreign minister said earlier Wednesday that officials there did not know how McAfee entered the country and that there was no record of McAfee entering legally at any official border crossing.

Belize authorities have said they want to talk to McAfee about the November 11 shooting of his neighbor, American businessman Gregory Faull.

[Updated at 5:20 p.m. ET]┬ĀThe death toll from Typhoon Bopha in the Philippines has risen to 418, with 445 other people injured and 383 missing,┬Āaccording the country's National Disaster Rescue Reduction and Management Council.

[Updated at 1:44 p.m. ET] The death toll from Typhoon Bopha in the Philippines has risen to 322, with 401 people injured and 378 missing, according the country's National Disaster Rescue Reduction and Management Council.

[Posted at 2:19 a.m. ET] An intense typhoon has carved across the southern Philippines, destroying buildings, setting off floods and landslides and killing at least 95 people, authorities said Wednesday.

Typhoon Bopha struck the large southern island of Mindanao, which is rarely in the direct path of tropical cyclones, fueling fears that it could be as devastating as a storm that killed more than 1,200 people there almost a year ago.

Bopha, the most powerful typhoon to hit Mindanao in decades, had top winds of 175 kph (110 mph) as it came ashore over the city of Baganga early Tuesday. Millions of people, many of whom live in remote and unprepared communities, were in the storm's path, Philippine authorities and aid groups said.

"It really is getting to be a very, very big typhoon and it's just starting," Richard Gordon, the head of the Philippine Red Cross, said Tuesday.

Trees have been uprooted and fragile houses blown away on Mindanao, Gordon said, adding that the corrugated iron roofs of some buildings were being carried through the air by the wind like "flying machetes."

Pentagon told to plan for cuts ahead of fiscal cliff

The White House has ordered the military to start planning for the possibility of cutting $500 billion from its budget over the next 10 years as part of the fiscal cliff, Pentagon officials said on Wednesday.

Agency spokesman George Little told reporters that the Office of Management and Budget (OMB) instructed the Defense Department to start internal planning for possible spending reductions on top of other cuts already in the pipeline.

The military had been ordered for months not to get ready for the automatic budget cuts - also known as sequestration - related to the fiscal cliff that would hit January 2.

A suspect in the death of a man who was struck and killed by oncoming New York subway train has been arrested and charged in the case, according to the New York Police Department.

Naeem Davis, a 30-year-old homeless man, has been charged with murder and attempted murder in the death of 58-year-old Ki-Suck Han, who was struck by a train after he allegedly was shoved onto the tracks during an altercation at a New York subway platform.

Davis has been in police custody since Tuesday.

A photo of the victim, desperately clawing at the platform shortly before he was struck, was published this week by the New York Post, embroiling the paper and the photographer in a controversy over whether the picture should have been taken and published.

[Update, 12:52 p.m. ET] Two protesters have been killed Wednesday in clashes between supporters
and opponents of the government of Egyptian President Mohamed Morsy, according to a spokesman for the Egyptian Ministry of Health, Dr. Mohammed Sultan.

[Update, 12:49 p.m. ET] Thousands of supporters of Egyptian President Mohamed Morsy clashed with anti-government protesters outside the presidential palace in Cairo Wednesday, driving them from the grounds where they had set up camp.

Morsy opponents pushed back, charging Morsy supporters with Molotov cocktails. Both sides exchanged rocks and fireworks before the anti-Morsy protesters were pushed back again.

It was unclear if anyone was hurt in the latest exchange. Earlier, the Ministry of Health said four people were injured in the scuffles.

People angered by Morsy continued a sit-in in Cairo's Tahrir Square after a night marked by violent clashes outside the presidential palace.

Police fired tear gas Tuesday night after protesters broke through barbed wire around the palace building and hurled chairs and rocks at retreating officers. Opposition forces later were calling for a march toward the palace.

After the initial clashes, police withdrew behind fences and the large demonstration was peaceful for several hours. A few dozen protesters and a scattering of tents remained outside the Itihadiya palace Wednesday.

The Muslim Brotherhood, the pro-Morsy Islamist movement, called for a rally in front of the presidential palace Wednesday afternoon in support of the country's leader and against his foes in the street.

NFL linebacker's mother screams as his baby cries in 911 tapes

Inside the Kansas City home that Jovan Belcher fled, his baby daughter wailed, his mother was in hysterics and his girlfriend was quiet. Barely breathing.

This is what the NFL linebacker left behind on Saturday in a rush of violence that left many wondering why.

Few answers came from 911 tapes released this week by police. But the tapes provide a heartbreaking soundtrack of the fleeting moments the morning that police say Belcher killed his girlfriend Kassandra Perkins and then later turned the gun on himself just outside the front door of the Chiefs' practice facility. 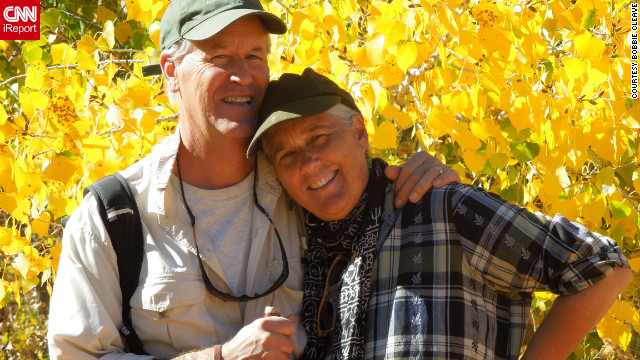 Across the country, a sudden shift is taking place.

Bobbie Cleave, a retired teacher in Utah, has put off plans to get a badly needed car. Brian Chandler, a data manager in metro Atlanta, is delaying buying a house, despite needing space for his second child due any day now. Retired police officer Richard Huffman of Michigan may ditch plans to re-enter the work force.

And several families CNN spoke with said they're shrinking the gift pile beneath the Christmas tree.

As the nation approaches the so-called "fiscal cliff," people are taking steps to cushion their families from the plunge.

To them, the threat to the nation's economy requires preparation - particularly with President Barack Obama warning that going off the cliff could cost the average family of four more than $2,000.

But some say the fears are just hype. 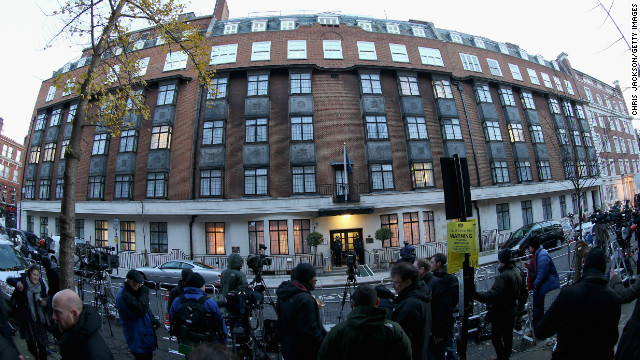 Two Australian radio DJs made a prank call to the hospital where Prince William's pregnant wife, Catherine, is staying with acute morning sickness, claiming to be Queen Elizabeth II and her son, Prince Charles.

The DJs, from Sydney's 2Day FM station, succeeded in getting through to Kate's private nurse at King Edward VII Hospital and had a brief conversation that included some details of her condition, according to audio of the call posted online.

The hospital issued a statement Wednesday confirming that the hoax call had been transferred to a ward in the early hours of Tuesday morning and a short conversation was held with one of the nursing staff.

The hospital "deeply regrets" the incident, it said.

9:00 am ET - ISS expedition briefings - NASA and the Russian Federal Space Agency will announce a yearlong expedition by two crew members aboard the international space station beginning in 2015.┬Ā The crew members will speak out at 10:00 am ET.

END_OF_DOCUMENT_TOKEN_TO_BE_REPLACED 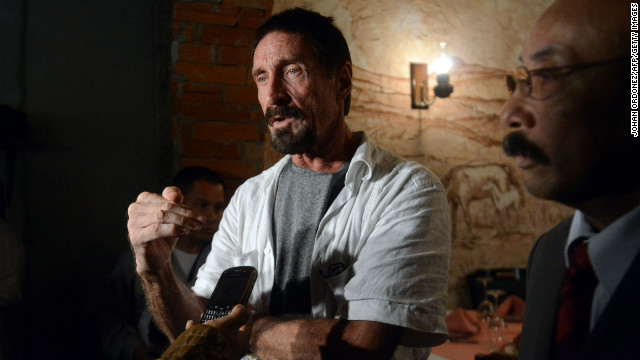 Tech mogul John McAfee has 'no interest' in returning to U.S.

But in the latest chapter of the saga, the millionaire says his month of evading Belize authorities is over.

And he plans to settle down in Guatemala, at least for now.

"I have a passport. I am in no trouble with the U.S. I can return any time I like," he told CNN en Espa├▒ol in Guatemala City on Tuesday evening. "I have been back to America many times since I have been in Belize. I have no interest of going this month or next but ... I can come and go freely to America any time I want."

McAfee has been on the run since Belize authorities said he is wanted for questioning in the death of an American businessman who was his neighbor in the nation's island of Ambergris Caye.

On Tuesday, the 67-year-old Internet security pioneer emerged publicly in Guatemala's capital, hundreds of miles away from the Caribbean island in Belize where his next-door neighbor was found dead.

McAfee's lawyer said he left Belize to escape police persecution and planned to file a formal request for asylum with Guatemalan officials Wednesday.

"He had to come here because it was the closest and the most immediate place to protect his life," attorney Telesforo Guerra told CNN en Espa├▒ol.

McAfee's arrival in Guatemala was the latest twist in an investigation that has drawn international attention and prompted the well known software company founder to go into hiding for weeks.

Belize authorities have said they only want to talk to McAfee about the November 11 shooting death of Gregory Faull, 52, an American businessman who was found dead in his home on the Caribbean island of Ambergris Caye.