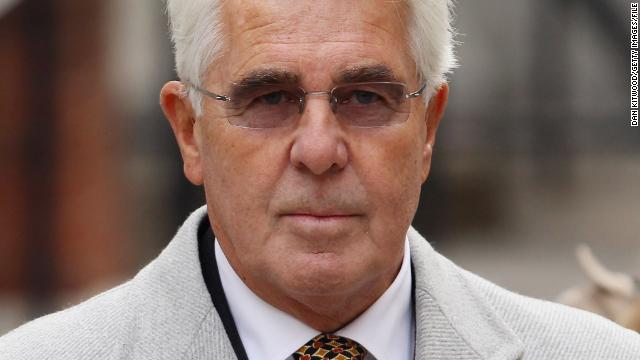 Publicist Max Clifford arrives at the High Court to give evidence to the Leveson Inquiry on February 9, 2012 in London, England.
December 6th, 2012
11:20 AM ET

His lawyer confirmed that Clifford - who is famous in Britain for representing celebrities and members of the public willing to sell kiss-and-tell stories - was being questioned by police, but did not say what it regarded.

"Max Clifford is being interviewed by police. Mr. Clifford will assist the police as best he can with their inquiries," said lawyer Charlotte Harris, at law firm Mishcon de Reya.

London's Metropolitan Police said a man in his 60s was arrested on suspicion of sexual offenses Thursday morning in Surrey, outside London, in connection with the inquiry involving late television personality Jimmy Savile.

But the force declined to name the suspect, in line with policy.

James Wood is on a mission to collect and store genetically diverse seeds from the trees that are most at risk from‚Ätwitter.com/i/web/status/1‚Ä¶po
cnni

5:01 am ET May 25, 2020 RETWEET
South Korea will adopt a cell phone QR code-based logging system for patrons of entertainment venues from June to a‚Ätwitter.com/i/web/status/1‚Ä¶yF
cnni

4:31 am ET May 25, 2020 RETWEET
The president of Taiwan, where sympathy protests were held in support of Hong Kong over the weekend, vowed to "prov‚Ätwitter.com/i/web/status/1‚Ä¶4K
cnni

4:13 am ET May 25, 2020 RETWEET
"We're just having a bit of an earthquake here." New Zealand Prime Minister Jacinda Ardern kept her cool as an ear‚Ätwitter.com/i/web/status/1‚Ä¶Tb
cnni