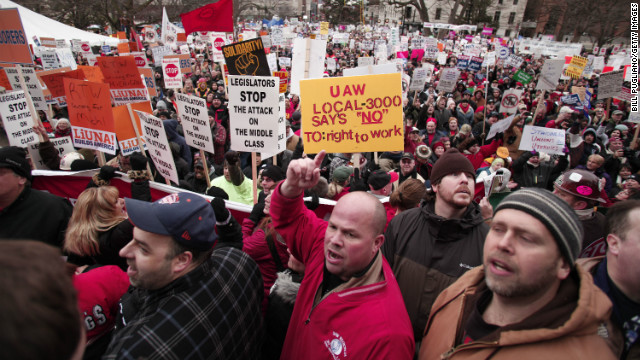 â€œRight-to-work is contentious legislation that stirs up the passions of people on all sides of the issue. While we are committed to working against these measures with every legal means available, Rep. Doug Geiss (Taylor) and the entire Democratic caucus stands against the use of violence and do not condone its use. 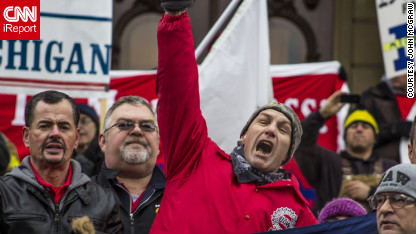 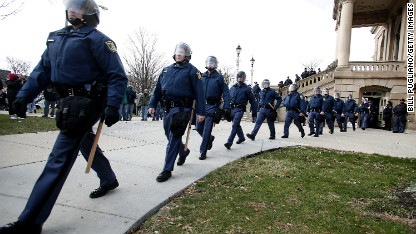 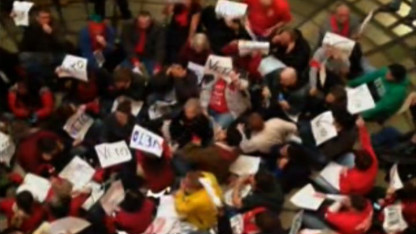 [Updated at 12:12 p.m. ET] Here's where things stand now. The Senate passed the billÂ  on Friday. Now that the House has done the same the bill relating to public workers will go to Michigan's governor. Next up: The bill on private workers. 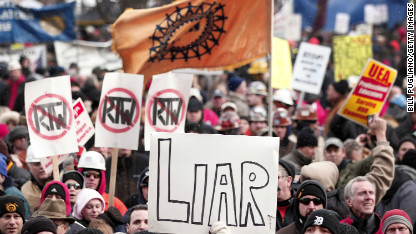 [Updated at 11:42 a.m. ET]Â No surprise that activist and Michigan native Michael Moore has an eye on this.

[Updated at 11:33 a.m. ET]Â Here's a scene from a little earlier showing a pretty heavy police presence at the entrance to the Michigan House Chamber ahead of the debate and vote. 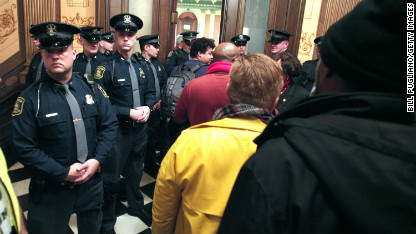 [Updated at 11:28 a.m. ET]Â The debate goes on in the Michigan state legislature. You can watch a live stream of the events right here.

[Updated at 11:16 a.m. ET]Â There are a lot of people watching and talking about what's going on.

[Updated at 11:07 a.m. ET]Â Bob King, the president of the UAW union, just told CNN's Poppy Harlow that he sees the bill now being voted on as a threat to rights. "It demonstrates to workers and really a broad spectrum of the populous that we have to work hard, we have to fight hard to protect our rights."

[Updated at 11:02 a.m. ET]Â CNN's Alison Kosik outside the state capitol building says although it looks like the vote will pass, the protesters around her want to know their voices have been heard. They tell her they will have the power come election time in two years to take further action.

[Posted at 10:53 a.m. ET]Â We're watching live video picturesÂ of crowds of people at the Michigan State Capitol as we wait to find out what will happen in a controversial move that could affect every worker in the state, and perhaps beyond.

Mills Lane, the third man in the ring for more than 100 championship boxing matches, has died, according to officiaâ€twitter.com/i/web/status/1â€¦8J
cnni