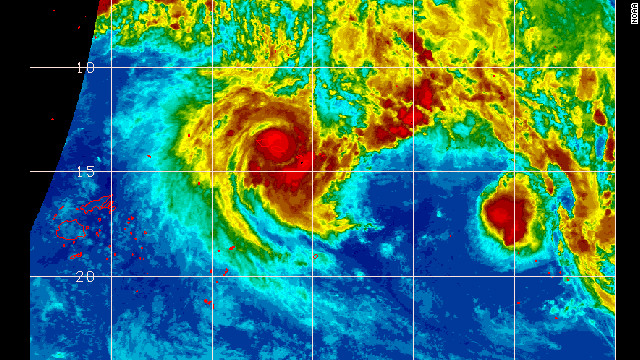 The weather service said Thursday morning that Evan was nearly stationary over the islands. The Joint Typhoon Warning Center in Hawaii said Evan's strength could increase over the next 48 hours, making it a Category 3 storm with maximum sustained winds of 126 mph, before it moves away from the Samoan islands to the southwest toward Fiji.

The islands straddle the International Dateline in the Pacific, meaning when it's early Friday in Samoa, it's early Thursday in American Samoa.

Fiji's Meteorological Service said Evan was expected to arrive in that country's waters by Sunday as a Category 3 storm.

Journalist Cherelle Jackson told ABC News of Australia that there was heavy damage in the Samoan capital of Apia, with houses flattened by the storm.

Storm surge and high surf, which the U.S. National Weather Service said could reach 20 feet in the islands, was making a mess of Apia, Jackson said.

Jackson said water and power service had been knocked out in Apia.

Many of the open-style Samoan homes, fales, which don't have windows or doors, sustained heavy damage, she said.

"I don't think we were well prepared because the warning didn't get serious until late last night," Jackson said in a phone interview with ABC.

Jackson said food could be a problem once the storm passes because the trees that supply Samoan staples, such as breadfruit, taro and bananas, had taken a heavy hit from the storm's winds.

"The breadfruits are just all over the road," she said.

"From what I have seen and heard it has made a huge impact on, for a start, all the vegetation, the trees, the infrastructure, all around Apia the power is out. A lot of people donâ€™t have any water . The trees have snapped, in a lot of cases have actually come down across roads, crashed into the fale, onto the houses," Hurley is quoted as saying.