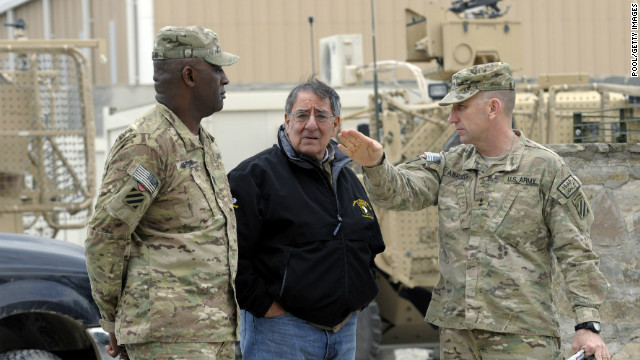 Three coalition troops and 10 Afghan civilians were injured after a suicide car bomb attack targeted a foreign forces convoy near the Kandahar airfield on Thursday, a spokesman for Kandahar's governor said.

The attack took place a few hours after U.S. Defense Secretary Leon Panetta left the airfield, according to a U.S. official who spoke to the U.S. press pool traveling with Panetta.

An International Security Assistance Force investigation team is on the site, according to ISAF spokesman Lt. Col. Hagen Messer.

"Currently ISAF officials are on the scene collecting facts and assessing the situation and as information becomes available we will release it as appropriate," Pentagon Press Secretary George Little told reporters. "I have no information at this time that this incident was associated with the visit of the Secretary of Defense.Â  The attack occurred after the Secretary returned to Kabul."

In the US, the more than 90 million ballots already cast represent about 66% -- almost two-thirds -- of the more thâ€twitter.com/i/web/status/1â€¦rH
cnni

3:13 pm ET October 31, 2020 RETWEET
The US reported the highest single day number of cases recorded for any country on Friday.Â  â€œWe now have one perstwitter.com/i/web/status/1â€¦EFbyA
cnni

3:08 pm ET October 31, 2020 RETWEET
For the sixth time, Puerto Ricans will be asked to vote on statehood, which is ultimately the call of the US Congreâ€twitter.com/i/web/status/1â€¦Fe
cnni