Uber says it has agreed to buy Postmates for $2.65 billion in an all-stock deal cnn.it/3gxgc7K

Ennio Morricone, the Oscar-winning film composer has died at the age of 91, his lawyer said cnn.it/2NVH4lx

Rescue workers in Japan are beginning a desperate search for survivors after dozens were left dead or missing follo‚Ätwitter.com/i/web/status/1‚Ä¶En

Eight people are believed to be dead after two planes collided over Coeur d'Alene Lake in Idaho and then sank, Koot‚Ätwitter.com/i/web/status/1‚Ä¶QA

Broadway actor Nick Cordero, who had admirers across the world rallying for his recovery, dies at 41 after a battle‚Ätwitter.com/i/web/status/1‚Ä¶R0

Remains found in Texas were identified as Army Spc. Vanessa Guillen, her family says. She had been missing since Ap‚Ätwitter.com/i/web/status/1‚Ä¶iu

Obama nominates John Kerry to be secretary of state

[Updated at 2:11 p.m. ET] President Barack Obama on Friday nominated Sen. John Kerry, the former presidential candidate who chairs the Senate Foreign Relations Committee, to be the next secretary of state.

The senior senator from Massachusetts is noted for the experience, gravitas and relationship-building skills that could help him succeed Hillary Clinton, the outgoing top U.S. diplomat.

Kerry (pictured) has traveled the globe on behalf of the Obama administration to mend frayed relationships. Most notably, he traveled to Pakistan after a series of incidents, including the raid that killed al Qaeda leader Osama bin Laden, that had set relations back.

He has support from Republicans as well as Democrats. The nomination will be sent to the Senate for confirmation.

"There are very few people with greater experience over a longer period of time," said Nicholas Burns, a former career ambassador who has served every secretary of state since Warren Christopher, and was most recently undersecretary for political affairs under Condoleezza Rice. "He would be a very, very impressive choice."

[Updated at 1:44 p.m. ET] House Speaker John Boehner said at a news conference Friday morning that his Republican colleagues refused to back his Plan B fiscal cliff bill because of what he called unfounded fears of being blamed for a tax increase.

"They weren't taking it out on me," he told reporters. "They were dealing with the perception that somebody might accuse them of raising taxes."

Boehner on Thursday dropped plans to bring the bill to a vote after it became clear that it didn't have enough support from members of his party. This leaves negotiations in limbo Friday - 11 days before automatic tax increases on everyone.

Boehner wanted to pass his Plan B fiscal cliff bill - which would have extended tax cuts that are set to expire at year's end for most people while allowing rates to increase to 1990s levels on income over $1 million - this week, before members of Congress went home for the holiday.

But it didn't come up for a vote, because House GOP leaders learned that they couldn't get enough of their fellow Republicans to sign on.

What this means next in the fiscal cliff talks is unclear. From here, scenarios range from intensified and ultimately successful talks in the coming days or entrenchment as the fiscal cliff becomes a reality next year, when a new Congress could enter negotiations with Obama.

The Sudan People's Liberation Army said it was an accident, according to spokesman Philip Aguer.

Four crew members were killed, the United Nations Mission in South Sudan said. The group reported that there were no passengers on board.

Aguer said that a craft was seen about 9 a.m. hovering near an SPLA command area. The army asked the U.N. mission whether it had sent a plane.

"The U.N. said there is no plane, they don't have plane in the area," Aguer said. 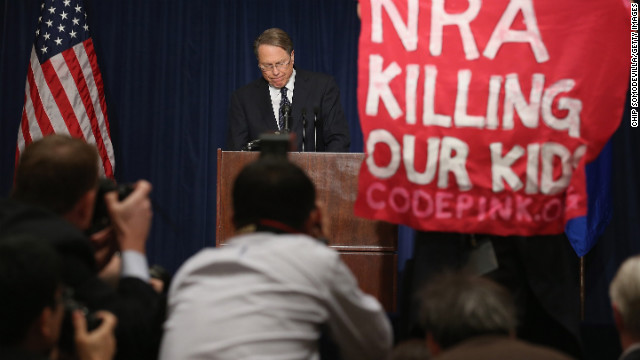 A protester holds a sign at the NRA's press conference in Washington on Friday. The protester was removed.
December 21st, 2012
11:28 AM ET

Congress should "appropriate whatever is necessary" to put armed police officers in every school in the United States, the executive vice president of the National Rifle Association told reporters in Washington on Friday.

"If we truly treasure our kids more than our money, more than our celebrities ... we must give them the greatest level of protection possible - ... properly trained, armed good guys," Wayne LaPierre said.

LaPierre, whose comments come in the wake of last week's shooting that killed 20 children and six women at a Connecticut elementary school, said the media demonizes gun owners, but that guns in the hands of "good guys" are desired by everyone in the moments they find themselves in danger.

Given federal spending in areas such as foreign affairs, "can't we afford to put a police officer in every single school?" LaPierre asked.

There were at least 132,180 public and private schools in the United States in the 2009-2010 school year, according to U.S. Department of Education.

"For all the noise and anger directed at us ... nobody has addressed the most important, pressing and immediate question we face: How do we protect our children right now ... in a way that we know works?" LaPierre said.

He said media outlets report "untrue" claims about firearms. "They don't know what they are talking about," he said.

LaPierre did not appear to signal that the NRA was willing to consider any of the various gun control proposals floated since the Connecticut shooting.

For the people of Newtown and for people across the country, 9:30 a.m. was a time to stop, listen and remember.

Bells rang in the Connecticut town and in churches and other buildings in multiple states Friday morning to remember the 20 children and six women who were gunned down at Newtown's Sandy Hook Elementary School at that hour a week ago.

Standing in rain - some holding umbrellas and others letting the water wash over their bowed heads - people in Newtown gathered outside various locations and paused as multiple churches rang their bells, once for each victim.

Connecticut Gov. Dannell Malloy and Lt. Gov. Nancy Wyman stood with others under the awning of Newtown's Edmond Town Hall, listening to bells of a nearby church. People also paused elsewhere in town - under a tent that covered the numerous flowers and stuffed animals left as a memorial - and outside various churches.

The talk in Washington is all about the "fiscal cliff" and what the president and Congress need to do to avoid it.¬Ý Watch CNN.com Live for continuing coverage of the fiscal cliff debate.

9:00 am ET - School safety forum - In the wake of the Newtown shooting, Education Secretary Arne Duncan will address a Washington on the need for comprehensive protocols and policies to protect students from violence and crime.

END_OF_DOCUMENT_TOKEN_TO_BE_REPLACED

A major snow storm that has hammered the Midwest, prompting road closures, school cancellations and power outages may lighten up today.

But light snowfall is expected to continue in a large swath from the Ohio Valley to New England.

It's unclear what triggered the latest clashes, but the two groups have fought for years over grazing rights, land and water sources.

8:54 am ET July 6, 2020 RETWEET
Prince Harry and Meghan, Duchess of Sussex, have encouraged Britain to reckon with its colonial past, highlighting‚Ätwitter.com/i/web/status/1‚Ä¶wS
cnni

8:40 am ET July 6, 2020 RETWEET
Here's everything you need to know about the coronavirus pandemic today: cnn.it/31NSpw0 üì© Sign up to getwitter.com/i/web/status/1‚Ä¶CsMCZ
cnni

8:27 am ET July 6, 2020 RETWEET
A woman died after falling from a roller coaster in a theme park in Oise, in northern France. cnn.it/3f2mrQo
cnni