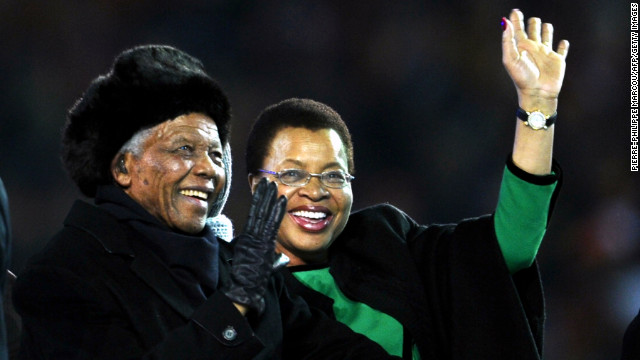 Former South African President Nelson Mandela will remain in a Pretoria hospital through Christmas, the government said on Monday.

In a statement on his website, President Jacob Zuma said that Mandela is responding well to treatment.

"We also humbly invite all freedom loving people around the world to pray for him. He is an ardent fighter and will recover from this episode with all our support," said Zuma, who visited Mandela on Saturday.

Mandela, 94, has received round-the-clock care since an acute respiratory infection in 2011. He was hospitalized for a lung infection on December 8; and on December 15, he had successful endoscopic surgery to have gallstones removed.

@bartolomeo_lisa And thank you for caring and engaging so politely and honestly. I appreciate that.
sarasidnerCNN

12:18 am ET October 1, 2020 RETWEET
@bartolomeo_lisa I get what you are saying. BUT I didn't say they were not a threat. I just said they are not consiâ€twitter.com/i/web/status/1â€¦aU
sarasidnerCNN

12:11 pm ET September 30, 2020 RETWEET
@cwarzel You are not alone. I feel the same way. The frustration with trying to get it right is off the charts.
sarasidnerCNN

10:40 am ET September 30, 2020 RETWEET
@TAPSTRIMEDIA @CNN Sir. You have me mixed up with someone else. I was NOT ON TELEVISION LAST NIGHT.
sarasidnerCNN

10:32 am ET September 30, 2020 RETWEET
@TAPSTRIMEDIA I was not on television last night nor did I tweet that. I think you have mistaken me for someone else.
sarasidnerCNN