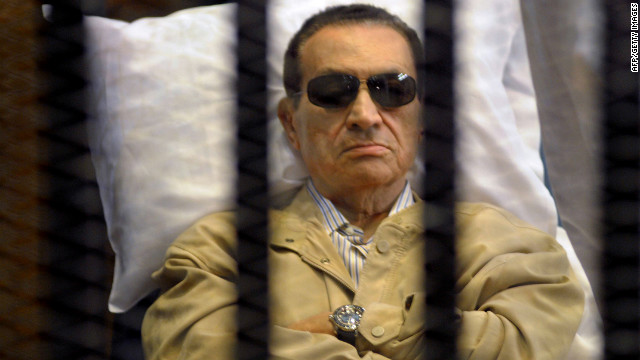 Ousted Egyptian president Hosni Mubarak sits inside a cage in a courtroom during his verdict hearing in Cairo on June 2, 2012.
December 27th, 2012
10:01 AM ET

[Updated at 10:01 a.m. ET] Former Egyptian president Hosni Mubarak was ordered to a military hospital after a report conducted by doctors stated that he had fractures in three of his ribs after he slipped in a prison hospital
bathroom this month, his lawyer Farid El Deeb told CNN.

[Posted at 8:19 a.m. ET] Former Egyptian President Hosni Mubarak, who is serving a life sentence in a Cairo prison, is being transferred to a military hospital for medical treatment, state-run TV reported Thursday.

Egypt's state prosecutor ordered the transfer. An update of Mubarak's health was not given.

Mubarak suffered a head injury and a bruised chest when he slipped in a prison hospital bathroom this month. The 84-year-old is serving a life sentence in Cairo's Tora prison for his role in the killing of pro-reform demonstrators during Egypt's recent revolution.