With bipartisan support, the House approved the fiscal cliff bill late Tuesday night after Republicans leaders ultimately decided not to try and tack on an amendment to the Senate version of the legislation.

The bill now heads to the president's desk for his signature

Coast Guard aircraft have found no sign of a spill from a Royal Dutch Shell oil drilling barge that ran aground off a southern Alaska island during a fierce winter storm, authorities reported Tuesday.

The rig - a key part in Shell's controversial Arctic oil exploration project - ran aground off Sitkalidak Island, about 200 miles south of Anchorage, on Monday night.

The Kulluk had been working in the Beaufort Sea, off Alaska's North Slope, until October. It was being towed back to its winter home in Seattle when it ran into a severe storm off the Alaskan coast. The Coast Guard evacuated its 18-man crew Saturday night, and it drifted for 10 hours on Sunday after the tug that was towing it lost power.

Outcry over a request for permission to sue the state of Connecticut for millions of dollars in the aftermath of the Newtown shooting prompted a New Haven attorney to at least temporarily withdraw his client's petition, the attorney said Tuesday.

"I was getting hundreds of (Facebook) comments" about the potential lawsuit. "So I figured I'd take (the request) off the table for now," said Irving Pinsky, who represents the parents of a 6-year-old survivor of the mass shooting at Sandy Hook elementary school.

Last week, Pinsky said in his filing that the state had failed to protect his client from what he described as "foreseeable harm."

The girl, identified only as Jill Doe, was at the school and apparently heard everything from gunfire to screaming over the intercom, Pinsky wrote in his Thursday letter to the state claims commissioner.

More back and forth on fiscal cliff, still no deal

It seems we're not much closer to a deal on the fiscal cliff.

The finger-pointing and the one-liners from both sides continues as we wait to see if we'll get a vote from the House after the Democrat-led Senate passed a bill that would put off budget cuts for two months and preserve Bush-era income tax cuts for individuals earning less than $400,000 or couples earning less than $450,000.

And since I refuse to talk anymore about who is kicking a can down a road or any tired sports metaphors I‚Äôm just going to give you the latest quotes from both camps this afternoon as they try and sort this out.

END_OF_DOCUMENT_TOKEN_TO_BE_REPLACED 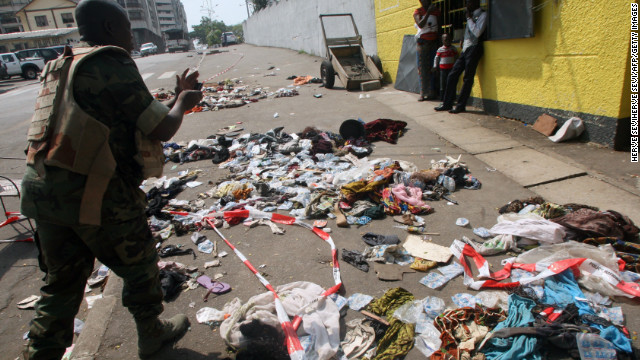 People stand next to clothing and various items spread over the pavement at the scene of a stampede in Abidjan, Ivory Coast, on Tuesday.
January 1st, 2013
03:44 PM ET

Many of the victims were trampled on or suffocated by the surging crowd, a senior fire official said on national television. Rescue workers were at the scene two hours later but could not save the victims, the official AIP news agency said.

"The president of the republic offers his saddest condolences to the families and close relations of the victims and ensures them of his compassion in those painful circumstances," Ouattara's office said in a statement issued Tuesday night.

Cantor: No decision on whether House will vote Tuesday on fiscal cliff deal

The Senate did its part, so will the House follow suit today and pass a fiscal cliff package?

So far, the answer is, we really don't know.

House Majority Leader Eric Cantor's office says there's no decision yet on whether the House will vote today on the fiscal cliff deal passed by the Senate.

The deal, which passed the Democratic-controlled Senate in an overwhelming 89-8 vote in the middle of the night, would maintain tax cuts for individuals earning less than $400,000 and couples earning less than $450,000. Technically, it would reinstate cuts that expired at midnight.

The bill temporarily extends certain tax breaks, such as the one for college tuition, while making new tax rates permanent.

It would mark the first time in two decades that tax rates jump for the wealthiest Americans - giving some bragging rights to President Barack Obama, who has long insisted on such a move.

But it also leaves him breaking a promise. The president had vowed to raise tax rates for the top-earning 2% of Americans, including those with household income above $250,000.

You can follow the latest developments on the fiscal cliff deal on our Political Ticker blog.

We may be into the new year, but we've still got a fiscal cliff vote to deal with.

After the Senate finally voted a full two hours after a midnight deadline on Tuesday, they passed a deal to avert the feared fiscal cliff on an 89-8 vote.

Today, it will be the House of Representatives' turn, where the proposed package will go for a vote in the Republican-controlled chamber of Congress.

"Glad it's over," said Senate Majority Leader Harry Reid, D-Nevada, after the vote. "We'll see if the Republicans in the House can become functional instead of dysfunctional."

A statement from House leadership made no promises.